A Kol Nidre Prayer on the German Warfront in 1870

Even on Yom Kippur, German Jews in the 19th century were ready to sacrifice themselves for their homeland 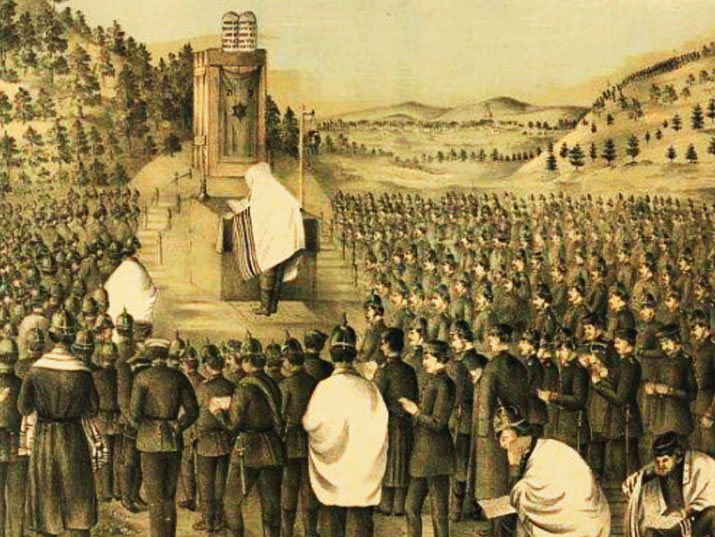 A Yom Kippur prayer during the siege of the city of Metz, 1870

The Franco-Prussian War broke out in the summer of 1870 and ended about six months later with the defeat of France. The war brought about the unification of the many German states and the establishment of the Second Reich.

These were not the first Jewish soldiers to fight for their country, far from it. Years before, Jews were drafted into the Austro-Hungarian and French armies. Jewish soldiers also took part in the American War of Independence, and the Russian army forcibly took Jewish children from their homes for military service as early as the 1820s, following the Cantonist Decree. In 1870, German Jews saw the war against France as an opportunity to show their gratitude for the equal rights they had been granted not long before. Against this background, about 4,700 Jews joined the German army to fight for their homeland.

On August 19th, 1870, the French Army of the Rhine retreated to the fortresses of the city of Metz and the Prussian army imposed a siege on the city.

The German Jews who were among the soldiers maintaining the siege must have hoped that it would end before the Jewish High Holidays. But Rosh Hashanah came, and the siege of Metz remained in place. The Jewish soldiers were allowed to hold prayers, but there were no chaplains to handle the preparations and lead the ceremonies. A young rabbi named Isaac Blumenstein took up the task, arriving at the military camp on September 30, just before Yom Kippur. The prayers were to take place at the First Army headquarters in the village of Sainte-Barbe, about eight kilometers from the battlefield.

The rabbi was offered to hold the Yom Kippur prayers in a local Catholic church. He refused and instead turned his and his neighbor’s personal quarters into a makeshift prayer space. Two candles were placed on a table that substituted as the bimah, and some 60 to 70 soldiers gathered there for the prayer.

Rabbi Blumenstein described the extraordinary event in an article that was published in the press after the holiday. A few days later, a soldier who had been there described it in a letter, adding that some officers and members of the command had also come. The soldier described Rabbi Blumenstein’s stirring sermon and how it even moved some to tears.

The German artist Hermann Junker (who was not Jewish) created two paintings commemorating the Yom Kippur prayer during the siege of the city of Metz in 1870. Not having been present at the event, the artist had to imagine both scenes, although the first painting is based on Rabbi Blumenstein’s description. The caption at the bottom of a postcard featuring the painting describes it as the Kol Nidre prayer on the eve of the Yom Kippur holiday. At prayers the next day, since there was no Torah scroll, Rabbi Blumenstein recited the Torah reading and Haftarah from memory.

The second painting documents the Yom Kippur-day prayers being held outdoors in an open field. The painting shows dozens of soldiers, most of them wrapped in their prayer shawls and holding prayer books, gathered around a rock that is being used as a bimah. At the center are three soldiers reading from the Torah scroll. Piles of weapons and even a cannon are shown at the ready. A number of civilians are also included in the picture.

This painting is based on a description written by an anonymous soldier before Yom Kippur that was published in the Jewish press after the holiday. His description noted that 1,174 Jewish soldiers from Silesia and Poznań were planning on attending the prayer. The soldier wrote that, with God’s grace and in the hopes that the French commander — that is, the enemy — would allow it, the prayer would take place in an open field. The soldiers would wear their Pickelhaubes (the typical Prussian spiked helmet) and wrap themselves in their prayer shawls. During the prayer, their non-Jewish comrades would keep watch from a distance to avoid any disruptions. However, things did not go as planned because shortly before the prayer service was to begin, most of the soldiers were called away on a mission.

Nevertheless, the painting of the prayer on the battlefield thrilled all who saw it. German Jews viewed it as conclusive proof of their loyalty, notwithstanding their religion and beliefs, to the German people and their readiness to sacrifice themselves for the homeland.

The importance of the German Jews’ military service in the war is also evident in a pamphlet published at the beginning of the war containing a sermon by Rabbi Rahmer of Magdeburg in German, which also included quotes in Hebrew from the scriptures.  The pamphlet is titled Milkhemet Khovah in Hebrew (“Compulsory War”, a halakhic term) and Der hielige krieg in German (“The Holy War”).

Unlike the painting commemorating the more modest service in Rabbi Blumenstein’s private quarters, Junker’s painting of the Yom Kippur prayers in the open field was copied, elaborated and distributed across Germany and beyond. It inspired other paintings of the same event, most of them more elaborate and detailed than Junker’s original, even replacing the natural rock bimah with a proper one as well as a Torah ark. In some of the paintings, non-Jewish soldiers are seen in the surrounding mountains guarding the Jews as they pray in the open field. One picture even shows Kaiser Wilhelm, Chancellor Bismarck, Chief of Staff von Moltke and other high ranking officers in attendance.

Another notable difference between Junker’s original image and the versions it inspired is that most of the later versions were colored, which made it possible to distinguish between the different military uniforms and units. Some of these versions also added poems and prayers in German and Hebrew.

Junker’s painting also inspired a version that was printed on red cloth and decorated with inscriptions, most notably the verse featured at the top from the book of Malachi (2:10): “Have we not all one father? Hath not one God created us?” In other words reflecting the notion that all German soldiers are equal, regardless of their religion.

Forty-four years after the Franco Prussian-War, Germany was at war again. Many photographs document German Jewish soldiers praying at different locations on the various Jewish holidays throughout the First World War. But the German Jewish families who still had Junker’s famous picture hanging on their walls must have been happy to see a similar painting from the latest war. In the first year of the Great War, an artist by the name of Pusch painted a picture inspired by Junker’s from 1870. Although it records a different place and time, here too, a large group of Jewish soldiers is portrayed praying for their salvation and the success of their countrymen on the battlefield.