Parents have probably been singing songs to their children since the dawn of history, but “Chad Gadya” – composed specifically to help children stay awake until the very end of the Passover Seder – may be the first song ever printed specially for children 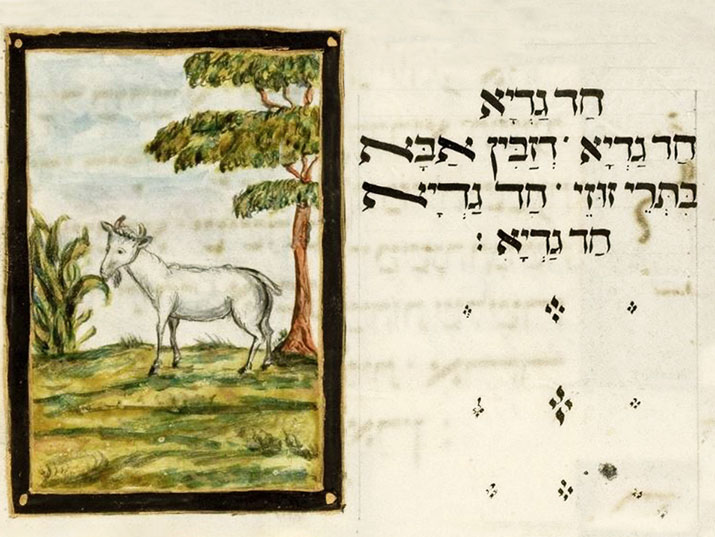 From a Passover Haggadah, Amsterdam, 1796; the Braginsky Collection, Switzerland

For most modern secular readers not well versed in the enigmatic midrashic style of our Sages, the Passover Haggadah is a rather abstruse text. The decision to conclude the work with an obscure liturgical poem about a strange little goat perhaps only increases the sense of confusion amongst readers. It is possible that the source of this odd song lay in the desire to hold the interest of the youngest participants until the very end of the Seder, which is traditionally a lengthy affair.

The purpose of the Haggadah is to fulfill the important commandment “and you shall tell your son” (and your daughter, we might add) the story of the Exodus. Thus, young boys and girls are the focus of the Passover Seder text and the Haggadah is full of various rituals and passages aimed at keeping the Seder’s youngest participants alert and interested: It is the children who ask the four traditional questions inquiring about the strange customs of the evening. They are the ones who search for the Afikoman and keep an eye out for the arrival of the Prophet Elijah. Chad Gadya, the concluding song, with its animals and other fantastic figures, represents something for the children to look forward to.

For this reason, some scholars have crowned Chad Gadya as the earliest known children’s song – or at least one of the earliest. We obviously have no information about songs which were not set down in writing and which were sung by parents to their children over the course of the thousands of years of human history – there must have been many. But in “Chad Gadya,” we encounter, probably for the first time, a song that was specifically written and put into print for the sake of the edification of children.

You may very well know the song by heart and perhaps you’re even humming along as you read, but let’s take a closer look at its attributes. Chad Gadya is what’s known as a cumulative song, meaning that in each progressive verse a new element is added to the list of elements from the previous verse. You are probably familiar with songs of this type. For example, “Old MacDonald Had a Farm,” “The Twelve Days of Christmas”, and the song that precedes “Chad Gadya” in the Haggadah, “Echad Mi Yodea?” (“Who Knows One?”). The repetition and familiar refrain make these kinds of songs especially popular with children.

What else can we learn from a quick look at the song? Although the language appears to be Aramaic, the song is in fact full of grammatical mistakes, and there are Hebrew words embedded in it as well, suggesting that the author wasn’t fluent in Aramaic and that at the time of its writing, Aramaic was no longer a spoken language.

This is also perhaps a clue as to when the song was written. The song’s appearance in the Haggadah dates to the 15th or 16th century, and earlier versions of it may have been written as early as the 14th century. The song first appeared in print in the 16th-century Prague Haggadah. An early version of the liturgical poem (piyyut), in impeccable Aramaic, has been located in a manuscript which was subsequently added to the prayer book of the Provence community in France. The wording is somewhat different than the version we sing today (for example, a mouse appears in some of the versions found in the region of modern-day France). It is assumed that the Jews who fled France after the great expulsion of 1306, brought the liturgical poem with them to communities in the region of Ashkenaz (modern day Germany and northern Europe), and from there it found its way into the Haggadah. Only later did the song also reach the Haggadot of the Sephardic communities in Spain and the Middle East.

But what is the origin of the poem? Are the motifs in it a Jewish invention? As one might expect in the case of an ancient folk song, we have no definitive answer to these questions. Similar motifs appear in many songs from around the world. In his article on Chad Gadya, Uriel Ofek mentions similar motifs in stories from Japan, Greece and as far as South America. One can find comparable tales in Russian and French, and some German-language versions even use the “Chad Gadya” formula. Interestingly, a Brothers Grimm fairy tale song, “The Pear Does Not Want to Fall,” bears a remarkable resemblance. In this song, a landowner sends a peasant boy named Jockli to shake a pear from a tree. After Jockli refuses, a dog is sent to bite him. When the dog refuses, a stick, water, a bull, and a butcher are sent in succession, with each refusing to carry out the task, until the intimidating executioner arrives, causing the rest of the characters to fall in line.

The song’s English equivalent is “The House that Jack Built,” with the chain beginning with malt (grain) that is eaten by a rat. The song’s characters are radically different and progress from a rat to a cat, a dog, a “cow with the crumpled horn”, a “maiden all forlorn”, a “man all tatter’d and torn”, a “priest all shaven and shorn”, a “cock that crow’d in the morn” and a “farmer sowing his corn”. Not everyone eats each other, but some scholars have insisted on the connection between the songs and have argued that Jack’s tale originated from the song about the Jewish goat. As mentioned, there is no way to determine for sure which came first. Uriel Ofek speculates in the article mentioned above that “it would not be an exaggeration to claim that there isn’t a nation or language that does not have a fable, rhyme or folktale with some Chad Gadya-like format or content.” 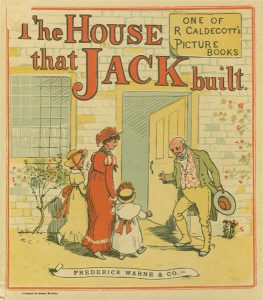 Jewish scholars over the years, not content to leave “Chad Gadya” as just an endearing tale in the Passover Haggadah whose sole purpose is to entertain the children, have layered it with interpretations. The cumulative chain of episodes, which can easily be read as nothing more than a humorous fairy tale, has been weighed down with theological import about God’s role in the world. One commentary, for example, suggests that the goat is a symbol of the Jewish people, and the other characters are the nations that have plotted to destroy it: Assyria, Babylonia, Persia, Greece, Rome, the Muslims, the Crusaders and the Turks. Finally, the Holy One will come and redeem the Jewish people.

Much has been written about this intriguing song that begins with a little goat and which concludes the Passover Haggadah. The mysterious piyyut has aroused the interest of researchers of folklore and liturgical poetry over the years who have tried to locate its origin and connection to similar folk songs in different languages. Perhaps around the Passover table this year you can also share something about the song, which may very well be the first recorded children’s song in history.

We did not forget that preceding “Chad Gadya” in the Haggadah is another song of similar structure, also intended for the enjoyment and edification of children. The story of “Echad Mi Yodea” deserves a separate article, but we can already tell you that it too appeared for the first time in print in the same 16th century Prague Haggadah, and that it was known in Europe perhaps from the 15th century. “Echad Mi Yodea” also has parallels in European languages, but unlike “Chad Gadya,” it spread much earlier to the communities of Spain and Portugal and even reached the Cochin community in India. Hence, the question of its origin is even more complicated, but we will tell you more about that in the future.

You can listen to a range of different performances of Chad Gadya which are preserved in the National Library of Israel’s National Sound Archive, here.