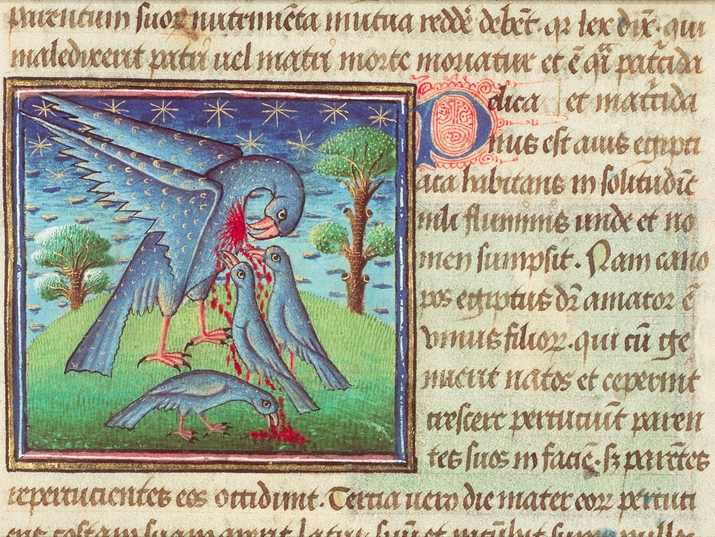 Illustration from a mid-15th century manuscript depicting a Pelican piercing its own breast so that its young may drink from its blood (Courtesy: Museum Meermanno, The Haag, MMW, 10 B 25, Folio 32r)

A bleeding pelican who wounds its breast and feeds its three young birds with its own blood is an unusual type of decoration in a synagogue.

In church art, on the contrary, this very image appears not infrequently. The source of the iconography is in all probability the Physiologus, a collection of moralized beast tales from Late Antiquity.

Originally written in Greek (though none of the original versions have survived) and translated into Latin, it was later introduced into most European languages, and is also known as Bestiary.

Despite its name, it was not a book of natural history, but rather one which intended to illustrate the metaphorical meanings – and more specifically the Christian allegorical meanings – which the writers believed to have been embedded in nature.

The book became extremely popular in various editions during the Middle Ages and was often illustrated. The pelican does not appear in all versions of the book, but it appears that the basic concept of the ‘behavior’ of the pelican was already established in the early Middle Ages.

“The pelican is an Egyptian bird that lives in the solitude of the river Nile. It is said […] that she kills her offspring and grieves for them for three days, then wounds herself and sheds her blood to revive her sons.”

Of all possible images, the Jewish Portuguese community in Amsterdam chose none other than the bleeding Pelican as its symbol.

What is the reason for this peculiar choice?

In Christian art the pelican is symbolic and metaphoric, with a specific reference both to the self-sacrifice of Jesus and to the idea of resurrection.

A medieval depiction of this scene appears in a 12th century capital decoration in the so-called ‘Room of the Last Supper’ on Mount Zion in Jerusalem. The capital dates to the time of the crusades and shows elements characteristic of the Romanesque style. The choice to use a symbol of self-sacrifice to decorate the room which the crusaders believed to be the site of the last supper is not surprising.

It is sometimes difficult to identify the bird as a pelican, yet most of the pelican depictions in medieval Christian art do not actually resemble the bird at all.

In some manuscripts, the pelican appears as a bird of prey. In other examples, such as the pelican decorating the dress of Queen Victoria I in a 1575 portrait now at the Walker Art Gallery, Liverpool, however, it much more resembles a swan:

The clear Christian message of the image makes it quite surprising to find the image in Jewish art. The history of the Portuguese Jewish community in Amsterdam may clarify the reason for this choice.

The Sephardic-Portuguese community arrived in the Netherlands after the signing of the Union of Utrecht (1579), a declaration of religious tolerance which created an inviting set of circumstances for Jews to settle in the Netherlands and particularly in Amsterdam.

The earliest Sephardic community in Amsterdam was ‘Beth Jacob’ (named after Jacob Tirado, also known as Guimes Lopez da Costa, whose house the community used as a synagogue). The second was ‘Neve Shalom’, founded in 1608. Ten years later, ‘Beth Jacob’ was split, and a third community, ‘Beth Israel’, was founded. In 1639, these three communities merged together under the name ‘Kahal Kodesh Talmud Torah’.

Before the unification, the symbol of the Neve Shalom community was the phoenix, which continued to be used afterwards as well, appearing on ketubbot (Jewish marriage contracts) in Amsterdam throughout the 18th and 19th centuries.

This legendary bird, which appears in Greek mythology and in the Talmud, also found its way into the medieval beast books and Christian iconography. According to the myth, the phoenix has an extremely long life, but dies into flames from which it is reborn.

The idea of regeneration from the flames probably appealed to the Sephardic-Portuguese Jews, who recognized the parallels in their own history, as their ancestors suffered greatly at the hands of the Inquisition, including the ‘auto da fe’ – execution by burning alive. The symbol of rebirth from the ashes – which can be seen as an allegory for building a new Jewish life in Amsterdam free of the fears that tormented Jews in Spain and Portugal – undoubtedly had its historic appeal.

Moreover, the symbol was probably not seen as foreign or alien, as the phoenix appears in ancient Jewish sources, as well.

This cannot be said about the pelican, however, which does not appear as a mythological bird in Jewish sources. Though it has clearly been used as a symbol of the Portuguese Jewish community in Amsterdam for a few centuries – as evidenced by its appearance on letters, books and documents – it is not known with certainty when, exactly, the community adopted the bleeding pelican as its symbol.

This seems to present a logical explanation as to why this image, which is very unusual in Jewish art, became the symbol for the newly-forged community.