The Wicked Son Runs the Seder: Yiddish Parodies of the Haggadah

They provided annual humorous explorations of religion, politics, current events and much more... 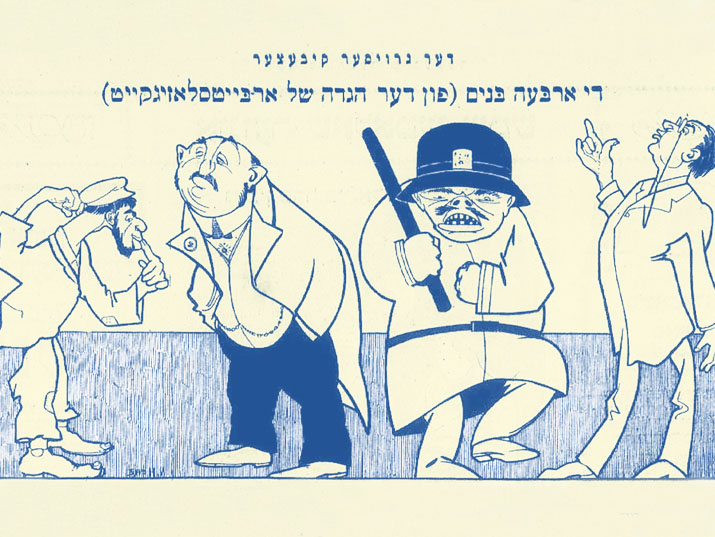 "The Four Sons (of the Haggadah of Unemployment)", appearing in the April 10, 1914 edition of the satirical newspaper Der Kibetzer⁩. From the National Library of Israel Digital Collection

Why is this article different from all other articles? It’s not because you’re reading it in a reclining position or because there’s something bitter about it. This article is different because it considers an odd fact of Jewish literature: that there are more parodies of the Passover Haggadah than parodies of other traditional texts.

Parody, the imitation of a literary style or structure for comic effect, is a relatively common product of Jewish and, especially Yiddish, humorists. Everything from the Tanakh to the Talmud through the greatest hits of Jewish liturgy have been parodied by wags the world over.

The question may be asked, who would do such a thing, and why? Who would dare to take sacred texts and imitate them just for a laugh? Apparently, it turns out, quite a few people: there are thousands of liturgical parodies. And while there’s no question that Jews hold their holy texts dear, using these traditional materials hasn’t seemed to rile anyone too terribly.

Israel Davidson, a scholar better known for his four-volume encyclopedia of medieval Jewish poetry, Otsar ha-shirah veha-piyut, noted in a lesser known book of his on Jewish parody that there were, in fact, some rabbis who didn’t appreciate liturgical parody and who complained about it.

Rabbis complain about a lot of things and, like many of their grievances, this one also fell on deaf ears, as Jews have produced liturgical parodies of all kinds and in especially large numbers as the number of Yiddish periodicals grew during the late 19th and early 20th centuries. Tempering the rabbinical gripes, perhaps, was that it was the nature of these parodies not to attack the source material, but to instead use the structure of the liturgy to launch satiric attacks on all kinds of other issues.

Each holiday season, Yiddish humorists would publish jokes, stories, and cartoons related to a variety of aspects of each one. Included among these were numerous parodies of some portion of the respective holiday’s liturgy.  Additionally, publishers of Yiddish satire material developed a tradition of printing discrete humor magazines dedicated to Jewish holidays, typically with cover cartoons that related to some aspect of the holiday.

Passover garnered more of these humor publications than any other holiday and almost all of them contained parodies of at least portions of the Haggadah. Why would Passover have more parodies on its liturgy than, let’s say, Purim, which is renowned for fun, inebriation, and mockery?

The reasons are fairly simple.

The central text of the Passover Seder, the Haggadah, is familiar to so many because it is read together with the family as part of a festive meal in the home. Moreover, everyone in the family old enough to read participates. Haggadot were also sometimes illustrated, making them both a rarity and more visually enjoyable than the average Jewish text. Most important, at least from the perspective of the humorist, the Haggadah contains distinct structures that are easy to imitate: the four questions, the four sons, and the ten plagues, for example. For parodists and cartoonists, these were the most common aspects to imitate.

Parodies of the Haggadah use the text’s literary structures to create humorous commentary on a wide variety of issues.

Most Haggadah parodies are fragmentary and do not attempt to use the entire text – although some do. Given the limited space available, in newspaper humor pages or in small magazines the focus was on aspects like the Kadesh, urkhats, karpas mnemonic, the four questions, and the four sons, among others.

Each year, Yiddish humorists would refill these structures with whatever issues were then important to readers. The subject matter was broad and one can find parodies dealing with virtually every political and social topic: from socialism to Zionism, Reform to Orthodox Judaism, to taxes, to high rent, to dating, to interest rates, to summer vacation, to beauty pageants, to moral issues, to the politics of the day, and more.

One of the earlier modern parodies can be found in an April 1887 edition of the Arbeter fraynd, a socialist newspaper published in London.

Its four questions read as one would expect a poor laborer to say them:

Ma nishtane, why are we different from Shmuel the manufacturer, from Meyer the banker, from Zorach the money lender, from Reb Todros the rabbi? They don’t do anything and they have food and drink during the day and also at night at least a hundred times over, we toil with all our strength the whole day and at night we have nothing to eat at all.

This parody was subsequently expanded into the Passover Haggadah with a Socialist Approach and republished multiple times in booklet form.

Der groyser kundes, a popular humor magazine based in New York, published this parody of the four sons in 1916:

The Wise Son: A shtetl horse thief who escaped from prison, stowed-away on a ship to America where he became a horse poisoner and a gangster until he managed to become a saloon keeper and a politician. Today he’s the president of his synagogue, a fighter for Judaism, in short, a mentsch …

The Wicked Son: A man who fills his wallet with relief receipts for victims of the war that he picked up off the ground and shows them to volunteers asking for money to prove what a big philanthropist he is. ‘See how much I already gave?’

The Simple Son: A kid who sits with a girl until 2 a.m. waiting for permission to kiss her.

The Son Who Doesn’t Even Know How to Ask a Question: A traveling salesman who only comes home on Passover to find his wife about to give birth and doesn’t think to ask how a woman can be pregnant for 12 months.

The popularity of Haggadah parody was such that nearly every Jewish community put something out that either supported their views or mocked their enemies. One example is the Peyskeh-blat, which appeared in Lublin in 1925.

An extended parody of the four questions and the sons created in order to promote Orthodox social mores, the scene is inverted and the sons become daughters.

Why, the daughter wonders, does her aunt show her cleavage, put on makeup, wear stockings, and have long fingernails? The piece deals with a number of moral issues and has each daughter, the wise, the wicked, the simple, and she who doesn’t know how to ask a question, each give their reasons for going, or not going to the mikvah.

Unlike most interwar parodies, the purpose of this one is to promote traditional Jewish values, but it does so in a humorous way, which is something not typical.

It ends with a short parody of Dayenu:

Haggadah parodies provide an unusual amalgam of traditional text and contemporary criticism, in addition to a plethora of referential material, much of which has gone under the historical radar. The parodies address an array of issues from a number of differing perspectives and allow for a unique and often humorous exploration of cultural, social, and political issues.

The satirists who created these parodies understood the power of combining the traditional Passover text with contemporary events to create satiric commentary. It was the enduring quality of the Haggadah that challenged them to do so.