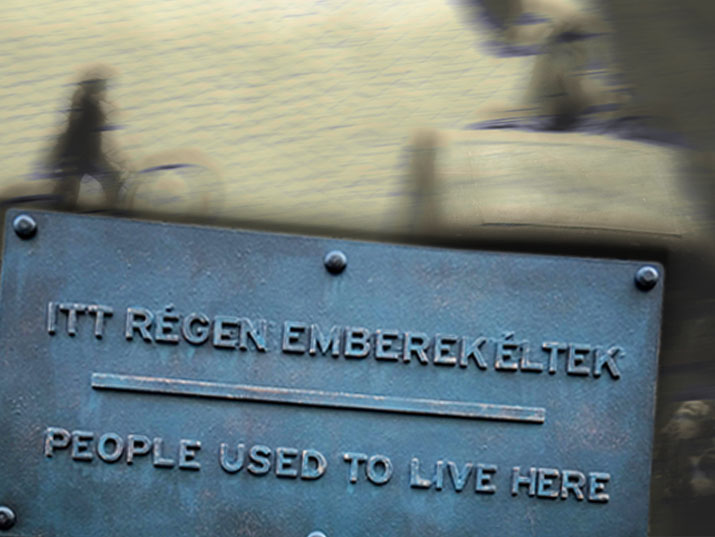 Though the chances of stopping the destruction seem small, activists continue their efforts to save cultural heritage sites in the Hungarian capital (Source images: Fortepan / Berkó Pál and Kispados; CC BY-SA 3.0)

A few days ago, news that one of the oldest houses in the Jewish district of Budapest will soon be demolished spread like wildfire on social media, sparking outrage.

The house at Kazinczy Street 55 will be leveled to make way for a 5-storey hotel belonging to a company linked to people with friends in high places. Although from an architectural perspective the house is rather nondescript, it is one of the last remnants of how the Jewish district looked before large-scale construction projects at the end of the 19th century.

In 1834, a man named József Schneider bought the building, which at the time had only one floor. It was here that he created the “Magyar Kártya” card game still popular today. Schneider decided to illustrate some of the cards with the figure of William Tell, as a symbol of the Hungarian struggle for independence from the Habsburgs.

Towards the end of the 19th century, the building housed a fashion store that belonged to Mór Rothauser, a distant relative of the famous opera singer Teréz Rothauser, who starred for years as part of the  Berlin Royal Opera before ultimately being murdered in Theresienstadt during the Holocaust.

In 1895, Cecília Fischer established a brothel in the house, which was equipped with running water and modern toilets, a first for such an establishment in Budapest.

Ten years later, followers of the Theosophical Movement, founded by Helena Blavatsky, bought the building. This esoteric movement influenced some of the greatest minds of the turn of the 20th century, including Thomas Edison, Alfred Russel Wallace, Vassily Kandinsky, Paul Gauguin, Arthur Conan Doyle and even Maria Montessori.

The disciples of the movement left their symbol on the door of the house.

After it was vacated by the movement’s adherents, the building housed several small businesses before being purchased by Tamás Wichmann, three-time Olympic medal-winning canoeist. He opened a famous tavern there, which survived Hungary’s 1989 regime change and quickly became a legendary hangout for locals.

No sign indicated the establishment’s existence, and its prices made it a hidden gem amid the dozens of bars catering to tourists’ tastes (and budgets).

Unfortunately, in 2018 Tamás Wichmann announced that he was forced to close his business after becoming seriously ill. The Olympic champion, who passed away in 2020, had greatly improved the quality of life in the district by funding a new playground in place of a parking lot next to his establishment.

The building was bought by a company with ties to government officials, which initially rented the ground floor to a pizzeria. On December 23, 2019, a building permit was filed for a hotel, which was approved on August 10, 2020.

Leading Hungarian news outlets have recently reported that adjacent and nearby lots on Király Street, including the playground developed by Wichmann, will also be demolished soon. These tenements, built during the first half of the 19th century, are also part of Budapest’s Jewish district, each an important part of the city’s history.

In 1891, a wealthy Jewish man named Mór Ungerleider opened a café at Király Street 27. Five years later, to attract clients, he came up with the idea of screening a motion picture there – for the first time in Budapest!

Ungerleider immediately understood that movies were going to become very popular, and he went on to own a number of theaters including the Royal-Apollo and the Apolló mozgó, the biggest movie theater in Budapest in the early years of the 20th century. Along with partners Lajos Weitzenfeld and Imre Roboz, Ungerleider founded the Főnix movie production company, which produced many films throughout the 1920s.

Despite their importance and the mobilization of many local history and culture enthusiasts, the chances of saving these historic landmarks from demolition seems small.

The news leaves a bitter taste in the mouths of those who witnessed a wave of destruction in the Jewish quarter between 2002 and 2010, when the disappearance of many historic buildings occurred after the district’s local council considerably weakened protections for historical monuments.

Activists continue efforts to save historical treasures from destruction, as countless buildings linked to Jewish and general Budapester history are constantly under threat, with the prospects of financial profit unfortunately often outweighing the importance of preserving cultural heritage.

UPDATE: Soon after this article was published, following extensive civil society and media efforts, the Hungarian Prime Minister’s Office announced that the building at Kazinczy 55 will be registered as an historical monument, and saved from demolition.