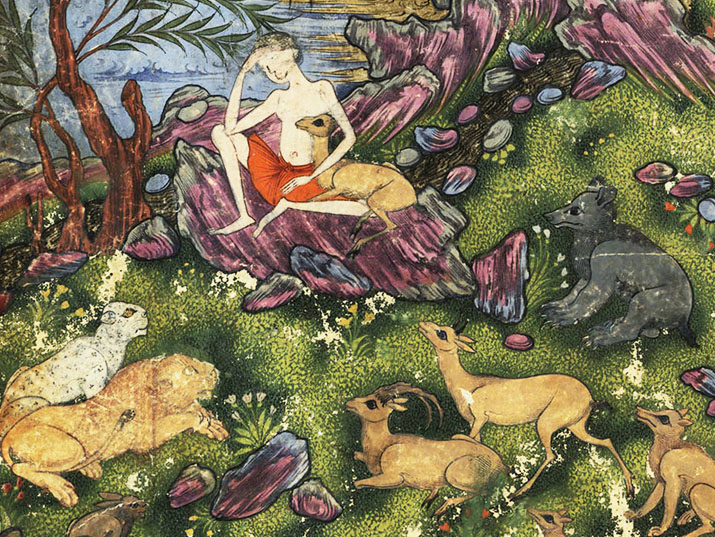 In 1192, a Persian poet by the name of Nizami composed a poem based on the tragic story of another young poet named Qays ibn al-Mullawah, whose love for one Layla drove him completely mad. Centuries earlier, Qays had fallen in love with his classmate, Layla, and she with him, yet her parents objected to the relationship between the two. Even with the help of his friends and acquaintances, Qays was not able to unite with his great love. But he would not give up. Wherever he went and whomever he met, he was reminded of Layla. Whenever he got a chance, he would sing of his love for her. This soon won him the nickname Majnun (Arabic for ‘crazy’.)

The brokenhearted Majnun fled to the desert, where he continued writing poems for his loved one, tracing the words in the sand before they were carried off by the desert wind. Anguished and helpless, the thought of Layla kept Majnun awake at night. While he slowly grew out of touch with human beings, Layla remained loyal to Majnun. Her parents forced her to marry another man, though she refused to consummate the marriage, rejecting his attempts to woo her. With the help of a Persian nobleman (portrayed as the saint al-Khider, referred to in many stories in Islamic tradition), Layla was able to arrange to meet with Majnun. The two did not physically touch each other in that last encounter. Instead, they read love poems to one another from a distance; Majnun, enthralled by the perfect image he had constructed in his mind of his unattainable love, fled back to the desert. When Layla’s husband died, she was finally able to grieve publicly. Those around her believed she was grieving the death of her husband, while in fact she was crying over the ongoing separation from her great love, Majnun. Shortly after, she died of heartbreak and was buried, per her request, in her wedding gown. Majnun rushed to her graveside and died as soon as he saw it. And so, the two were buried side by side, their graves becoming a pilgrimage site – a symbol of their reunion, achieved only in death. Nizami’s poem ends with the dream of a common friend of the couple, in which the two are united in their love, living happily ever after in heaven, as a king and queen. 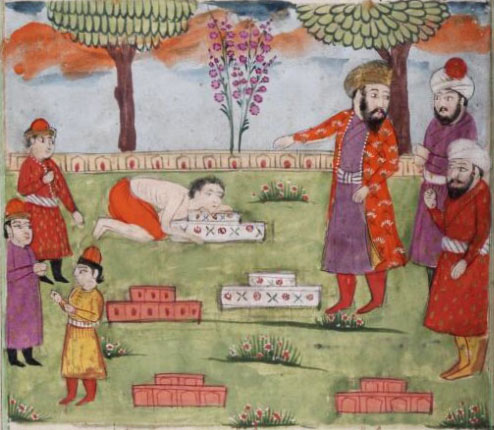 Lord Byron called the Persian lovers “the Romeo and Juliet of the East.” Much like the eternal lovers of Verona, the story of Majnun’s love for Layla appeared in oral legends as well as a number of manuscript fragments even before it was immortalized by a great writer – in their case, the Persian poet, Nizami.

Believed to date back to the 7th century, the story’s origins are not Persian, but Arabic. “The Book of Songs” (Kitab al-Aghani), written by Abu al-Faraj, a 9th century Arabic lexicographer and poet, tells the story of a poet who lived in the days of the Umayyad dynasty. Using his penname, ‘Majnun’, the anonymous poet was able to fearlessly express his unfulfilled love for his cousin, for whom he composed love poems that described the pain of being separated from her.

Short, anecdotal forms of the story of Layla and Majnun began to circulate in Arabic and Persian literature and poetry, every instance expressing a different aspect of the life and death of the two lovers. In one version, the pair meet in a field and not at school; some highlighted the companionship between Majnun and the wild animals he met while living alone in the desert; others focused on the correspondence between the married Layla and tormented figure of Majnun. 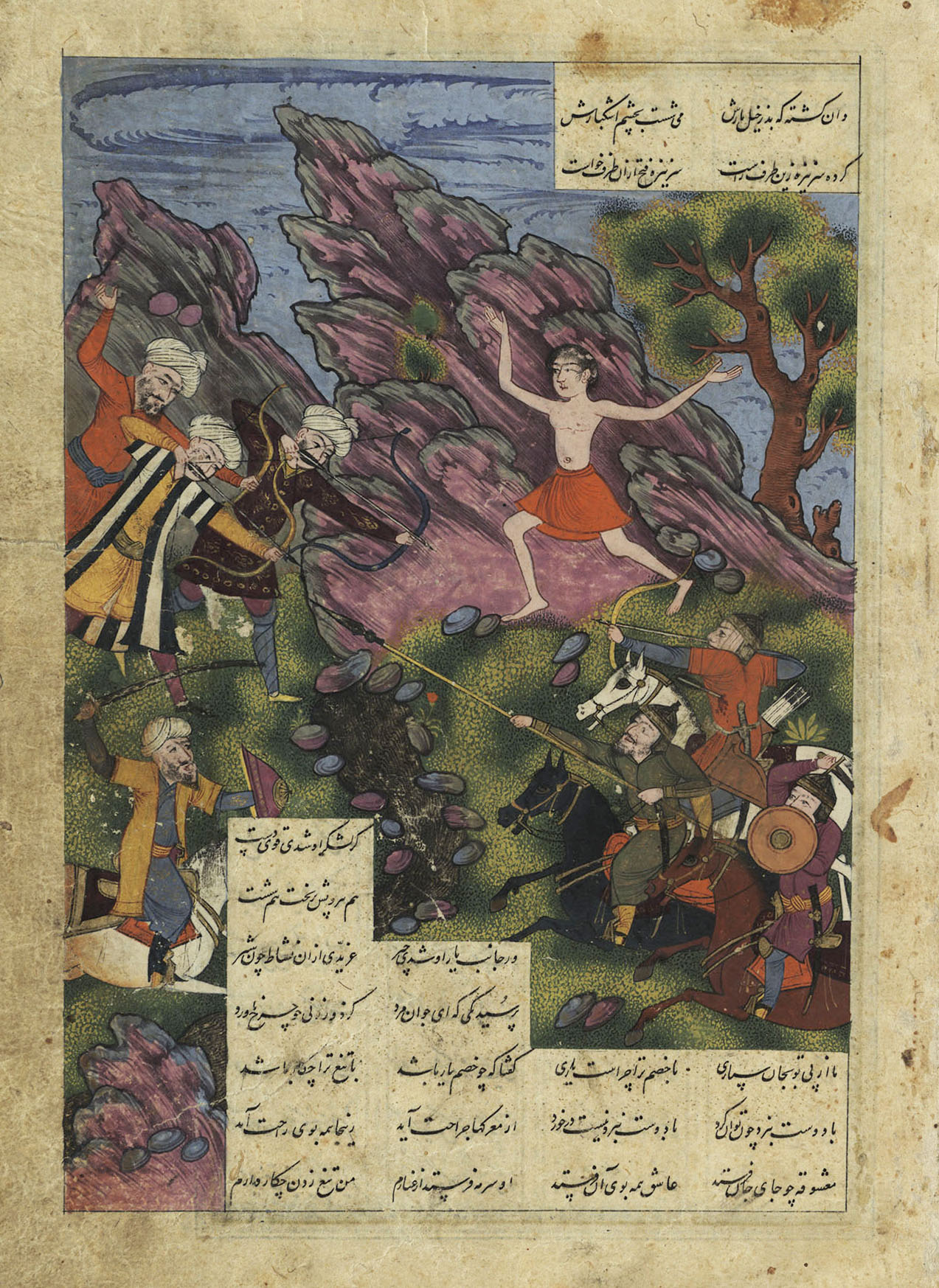 Hundreds of years before Nizami composed his famous version of the story, the legend of Layla and Majnun was already known throughout the Middle East. One reason the love story became so popular was its mystic features. Qays/Majnun was a perceived as something of a role model in Sufi mysticism. As the researcher Michal Hasson told us, “In Sufism, man seeks to unite with God, and the relationship between man and God is one of great love and yearning. Even the greatest mystics, who grow especially close to God over the course of their lives, can only fully unite with Him at death. Thus, the day of the passing of the Sufi saint Mu’in al-Din Chishti is celebrated every year and is called Urs, which means ‘wedding.’ Majnun, who spent his entire life searching and longing for his love, but would only unite with her in death, is the ultimate depiction of love and desire for God – and Layla, the reflection of the beloved divine one.”

In 1188, the Persian poet, Nizami, wrote his great poem, containing some 4,600 verses. Nizami replaced the original Arab-Bedouin setting with an urban Persian one, along with the secondary characters that accompanied the lovers – the Meccan governor who tried to help the two lovers reunite is presented as a Persian nobleman; the young lovers who originally met in the Arabian deserts – two commoners surrounded by camels and merchants – meet at the beginning of the Persian poem at school, as children of aristocracy. 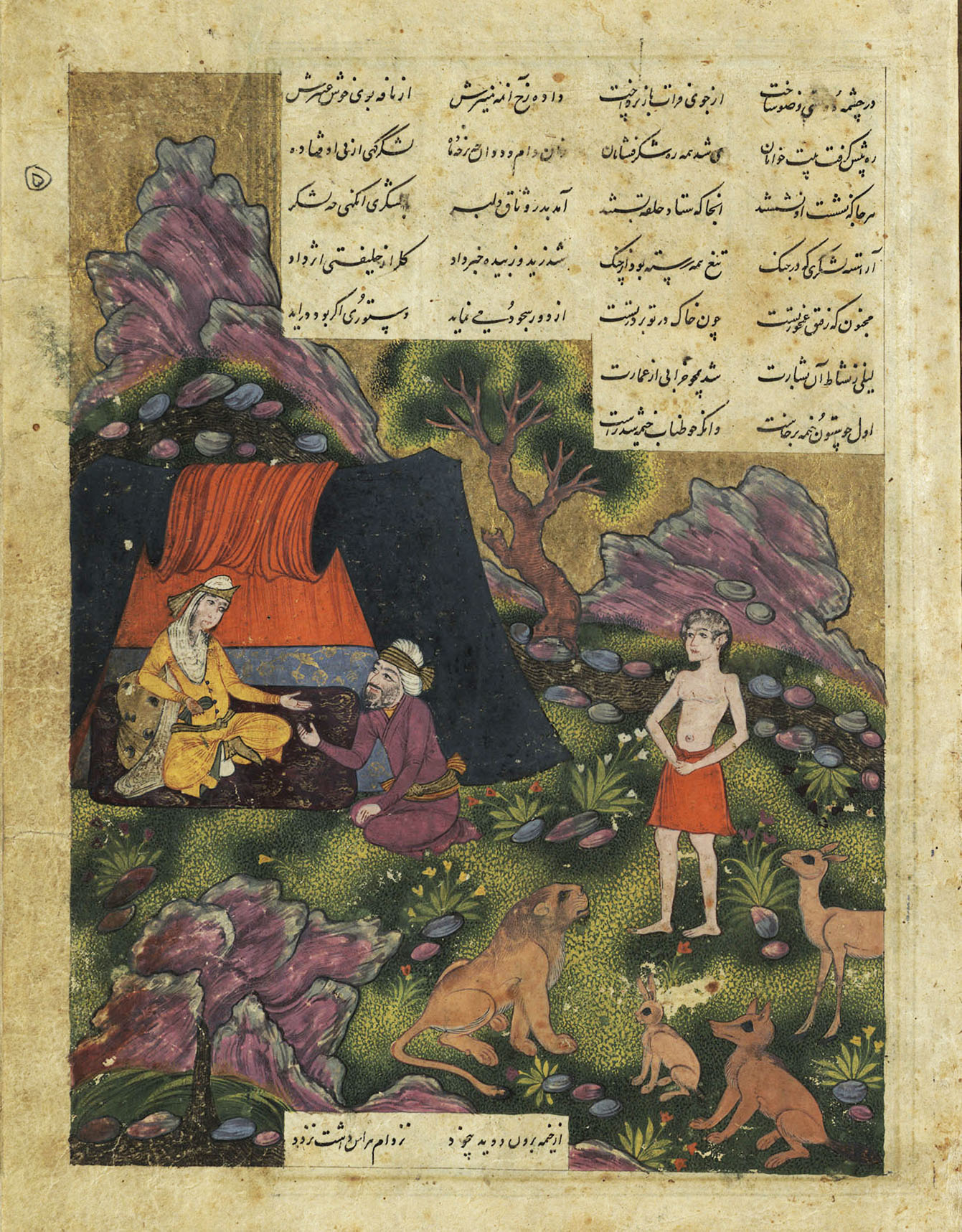 Since Nizami published his poem in the 12th century, the story of Layla and Majnun has traveled far beyond the borders of the East. Many different versions were created and it became the most “reproduced” story in Persian history. Before it was translated into European languages in the 18th and 19th centuries, a range of Arab and Persian poets who hoped to achieve something approaching Nizami’s stature composed Layla-and-Majnun poems of their own. Later, the pattern was repeated in Turkish, Urdu, and many other languages. According to Michal Hasson, “Layla and Majnun can therefore be found in 17th century wall paintings in Rajasthan, in Mughal miniatures, in Arabic poetry and, of course, in Persian poetry, as well as in numerous other works in different languages. There is also a “tomb structure” dedicated to the lovers in a small town on the border of India and Pakistan.” Even the 1970 song Layla, written by British musician Eric Clapton, was inspired by the tale. Clapton became familiar with the story, and was able to relate to its theme of unattainable love, which reflected his own feelings toward Pattie Boyd, the wife of his friend George Harrison.

The National Library of Israel is in possession of five different versions of Nizami’s work. One of them is a beautifully illuminated manuscript copied by Mohammed Ibn-Mula, around the year 1603. It contains many marvelous pictures, like the one below showing a young Majnun embracing a blue-eyed doe, a symbol of his one and only, long-lost love, Layla.

Another beautiful example is this Kashmiri manuscript from 1798, which contains an illustration of Layla and Majnun meeting one another. 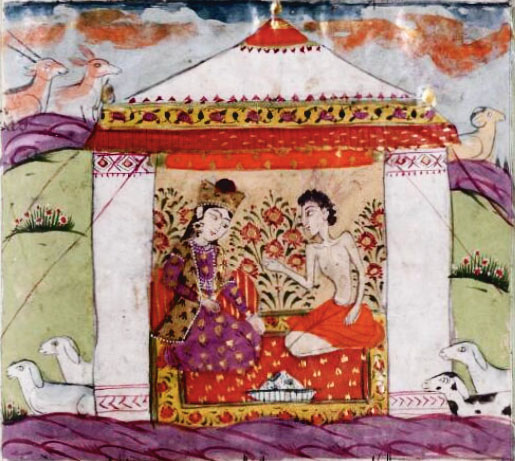 In 2018, Yuval Shiloach first translated the story of Layla and Majnun into Hebrew, not from the original Persian version, but from Rudolf Gelpke’s English translation, published in 1966.

Read more about Layla and Majnun at Encyclopædia Iranica.

Thanks to Dr. Michal Hasson and Dr. Samuel Thrope for their help in writing this article.