“Israel is a graveyard for Jewish languages”: An Interview With Dr. Tamar Eilam Gindin

The culture of Iranian Jews in Israel is bound up with a language that is nearly lost: Judeo-Persian. According to Dr. Tamar Eilam Gindin, a linguist and scholar of Iran, Judeo-Persian is not just one language. It is rather like a tapestry woven over thousands of years of Jewish history in Persia, so that sometimes different dialects were even found in the same city. In this interview, Dr. Eilam Gindin discusses the fate of Judeo-Persian in Israel as well as the secret language of Persian Jewry… 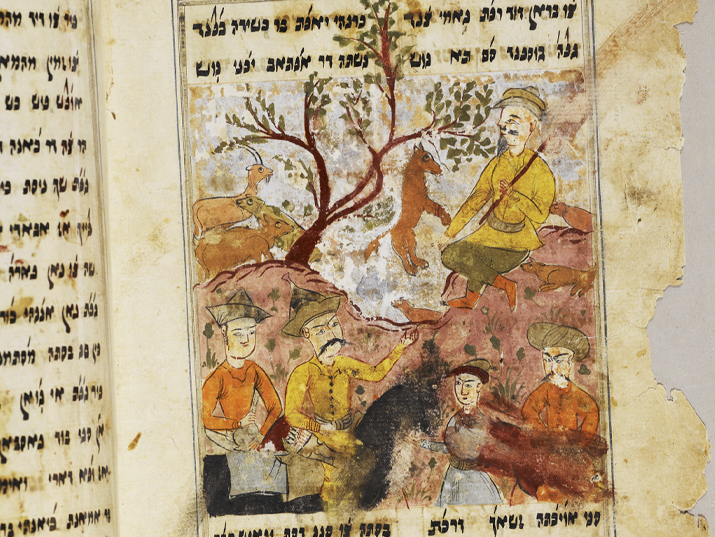 A story written in Judeo-Persian, 17th-18th century. Courtesy of the Jewish Theological Seminary of America, New York, accessible through the National Library of Israel’s Ktiv project

When was the last time you heard someone speaking Judeo-Moroccan, Ladino or Judeo-Persian? You may be familiar with a few words that come up in conversations at home with family members, but the truth is that most Jewish languages are no longer spoken, certainly not on a daily basis. Yet, these languages carry a great deal of cultural baggage, each one telling the story of a whole community, stories that for the most part have disappeared into the mists of time.

One of these Jewish languages that has been nearly forgotten ​​in Israel is Judeo-Persian, which is why we turned to Dr. Tamar Eilam Gindin, a linguist and scholar of Iran, who is herself fluent in quite a few languages. We wanted to focus on the story of Judeo-Persian but we very quickly learned how mistaken we were in making such a generalization. “It is highly inaccurate to speak about Judeo-Persian as one language. In fact, there are many Iranian-Jewish languages, not all are even Persian, and all of them have undergone quite a few changes. What began as Judeo-Persian is today a language very similar to Persian and is not written in Hebrew,” she explains with a smile.

How did this group of languages we call Judeo-Persian come about?

[Dr. Tamar Eilam Gindin]: “In general, wherever Jews settled, as with any immigrant community, the first generation probably spoke Hebrew, but the second generation spoke the local language. What preserved the language was the desire to maintain a Jewish identity and this was expressed in the preservation of the “family slang”, that was spoken in Grandma’s house. In addition, given the sacred status of Hebrew, there was always a scholarly elite that continued to speak Hebrew, which remained the common language (Lingua Franca) of all the Jewish communities in the world. Through that elite, Hebrew words continued to permeate the local Jewish language. Specifically in Iran, there are many dialects. Some imagine it like the branches of a tree, but in fact it’s more like patterns on a carpet—between neighboring villages there are small differences, but a few villages away, it’s a completely different dialect. Anywhere with a large enough Jewish community, a Jewish language developed. In Yazd, the language was different from one Jewish neighborhood to the other, so that while the residents of the northern neighborhood understood both languages, the residents of the southern neighborhood didn’t understand the northern one.”

“It was once common to speak of the three characteristics of a Jewish language—it had to be written in Hebrew script, it had to have a Hebrew element, as well as archaisms. Yet we now know that none of these are necessary nor sufficient. Most of the Jewish languages ​​today, including Judeo-Persian, are written in local script but are still Jewish and used mainly by Jews. The other two characteristics are not always present either. Take for example, Jewish-American English, we can’t claim that it’s archaic. Also, the Hebrew component in it is not exclusive to the language: Hebrew words have permeated common English. Likewise, today’s Judeo-Persian is not archaic. Contact between Jewish society and the general society in Iran grew closer during the mid-20th century, so that today Judeo-Persian is almost indistinguishable from Persian and the Hebrew component in it is very minimal.”

What singles out Judeo-Persian among all the Jewish languages?

“What’s beautiful about Judeo-Persian is that because it’s been around for so long, you can see different stages in its development. You can see the first stage in books like the Book of Esther, which is Hebrew with a Persian element. The Talmud contains a lot of Persian words, but it’s still Hebrew and Aramaic with a Persian element. This is the beginning. In fact, the books of Daniel, Ezra and Nehemiah also contain a Persian influence, and in modern Hebrew there are quite a few words that derive from Persian and are deeply rooted in the Hebrew language, such as pardes (orchard), egoz (nut), zman (time) and handasa (engineering).”

When was the first written documentation of Judeo-Persian?

“Ancient Judeo-Persian is recorded from the 8th century CE. In fact, it is the earliest recorded writing of New Persian. The Muslims, who spoke Persian at home at the time, wrote in Arabic, so there is no record of their spoken language. The Zoroastrians were still trying to write in Middle Persian, which reflects a phase before New Persian. The Jews wrote in the language they spoke, using the letters they knew—the Hebrew alphabet. This is equivalent to Israeli Arabs writing in Arabic in Hebrew letters, or “Penglish”, Iranians writing Persian using the English alphabet.”

“The same early Judeo-Persian documentation also contributed to the study of Iranian languages ​​in general. The earliest document in Persian in Hebrew letters, from the 8th century as mentioned, is an inscription found in Afghanistan. Researchers were unable to decipher it. They tried all kinds of Middle Persian scripts and were unsuccessful, until they realized that the letters were Hebrew written in a script that was something between Rashi script and square script. And voila! They were then able to decode this Persian text. In fact, the different languages ​​of the Jews in Iran make it possible to study the history of the Iranian languages, because while the local population was already speaking a different language, the spoken Jewish language remained faithful to the original local dialect. As mentioned, there were many local Jewish dialects in Iran and most were descended from the Median language. Few of them have been studied, mainly those of Isfahan, Yazd, Kerman, Shiraz, Hamadan and Kashan.

How did all these languages ​​develop?

In Iran, the Jews first adopted the local language and then preserved it in a changing environment, which was relatively easy within a closed community. It turned out that like many small and closed communities, they preserved the original language while the Muslim communities around them advanced linguistically. In the Muslim communities, the language was lost in favor of Persian or changed in another direction. The Zoroastrians, for example, are also a minority in Iran, and there are other ethnic minorities and not just religious ones. Every minority in Iran, even in different villages, has different dialects. This is possible because these are closed communities and these dialects remain more archaic, that is, more similar to the original language. So often times, when we want to understand what Iran looked like linguistically, we have to go to the Jewish languages ​​and the local languages ​​and to see through them. What’s also interesting is the Jewish secret language that developed there.”

A secret Jewish language in Iran?

“Yes, Loterāʾi is a Persian dialect that uses a Hebrew lexicon which developed at the same time as Judeo-Persian, and was designed to prevent Iranians from understanding what was being said. A whole jargon of a hidden language developed, which Iranians usually could not decipher. Only those in the know, meaning the Jews, could.

In Israel today, the Judeo-Persian language of those who emigrated from Iran is heavily influenced by everyday Hebrew. It’s a similar situation to that of the Persian communities in the US, who preserved their Persian heritage but who have also assimilated into society, so that Persian has naturally disappeared over time.”