Yusuf Za’arur was a talented musician and expert qanun player who served for many years as the musical director of the Radio Baghdad Orchestra. When he immigrated to Israel, he had to fight for recognition, but his great talent led him to renewed success in Israel as well 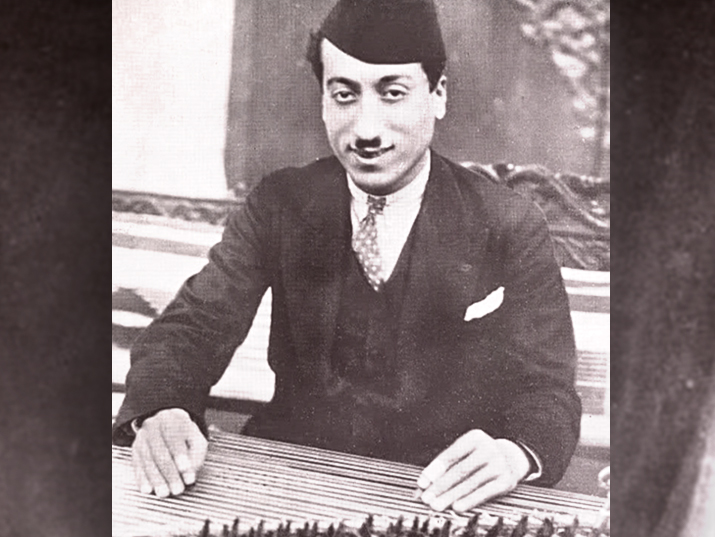 Yusuf Za’arur at the International Congress of Arab Music in Cairo, 1932

One day, during a rehearsal of the Israel Broadcasting Authority’s Iraqi Maqam Orchestra, the qanun player Yusuf Za’arur saw a fellow qanun player, Avraham Salman, sitting outside the door trying to imitate Za’arur’s wonderful technique. Za’arur approached Salman and said to him jokingly: “What are you doing, young man? Trying to imitate my playing? Copying from me?” The joke was an attempt to diffuse the inherent tension that is palpable whenever a student tries to outdo his master. After all, Za’arur knew Avraham Salman from their days back in Iraq, when Za’arur had been the musical director of the Radio Baghdad Orchestra. Za’arur would promote talented young musicians, mainly from among the Jewish community. Avraham Salman was one of them.

Yusuf Za’arur was born in 1902 to a wealthy family in Baghdad. He displayed musical talent from a young age, and at 18 bought himself his first qanun. He also played the violin and cello. In 1932, he participated with other Iraqi musicians (all Jews) in the First International Congress of Arab Music in Cairo. A rare recording from this event can be found in the collections of the National Library of Israel. On track five, one can hear Za’arur’s virtuoso playing on the qanun. His talent earned him a medal and first place in the Congress.

Za’arur joined Radio Baghdad in 1936 and by 1941, he was appointed the station’s musical director. He held this position until his immigration to Israel in 1951. While working at Radio Baghdad, he promoted many Jewish musicians, among them the singer Salim Shuwat, Albert Elias, Avraham Daoud, Avraham Salman, Daoud Akram, Haki Ovadia, Shuweh Yehezkel, Elias Zebida, Sasson Abdu, Yosef Yaakov Shem Tov and the young singer Saleh Alshabli.

Za’arur did not just promote Jewish singers. When the Iraqi singer Nazem Al-Ghazali came to audition for him, he sang a song in an Egyptian style. Za’arur then asked him to sing an Iraqi song and told him that the Iraqi maqam was better suited to his style of singing. After the audition, Za’arur told Ghazali that he was very talented and he predicted a great future for him, which indeed turned out to be true.

During the years he worked at Radio Baghdad, Za’arur composed many popular tunes and worked with the great Arab singers of the time, from the respected composer Mohammed Abdel Wahab to the great singer of the Arab world Umm Kulthum.

Although he was a much sought-after musician, as a civil servant he gave private performances only to a limited number of personalities, among them King Faisal of Iraq and Prime Minister Nuri Al-Said.

Immigrating to Israel inevitably brought a sharp decline in Za’arur’s status, and he went from managing singers and orchestras to playing private concerts for families from the Iraqi community in Israel. Although having fallen from his revered status in Iraq, he continued to try and include other musicians. His family says that when he was offered to play at a family celebration, he would ask the hosts if they were also interested in having a violin or oud player accompany him on the qanun. The hosts generally declined his offer because they only wanted to hear him play. However, out of appreciation for his great talent, they paid him as if he were an entire orchestra.

His great talent brought him renewed recognition in Israel and he founded the Chalery Baghdad maqam orchestra which was part of the Arab Orchestra of the Israel Broadcasting Authority. Many of Yusuf’s recordings from his time with the Israel Broadcasting Authority can be found in the collections of the National Library of Israel. However, he had to fight for his place among established musicians in Israel, some of whom he had promoted and cultivated in Iraq.

The story with which we began this article demonstrates the struggle for recognition between newer and older immigrants and Yusuf Za’arur’s unique and inimitable talent. Many musicians have tried to achieve his level of skill, including his great-grandson, the qanun player David Regev-Za’arur, who says that he tries to play like his great-grandfather, and hopes that he will one day succeed.