An Eternal Love Song: 10 Classic Israeli Hits Inspired by the “Song of Songs” 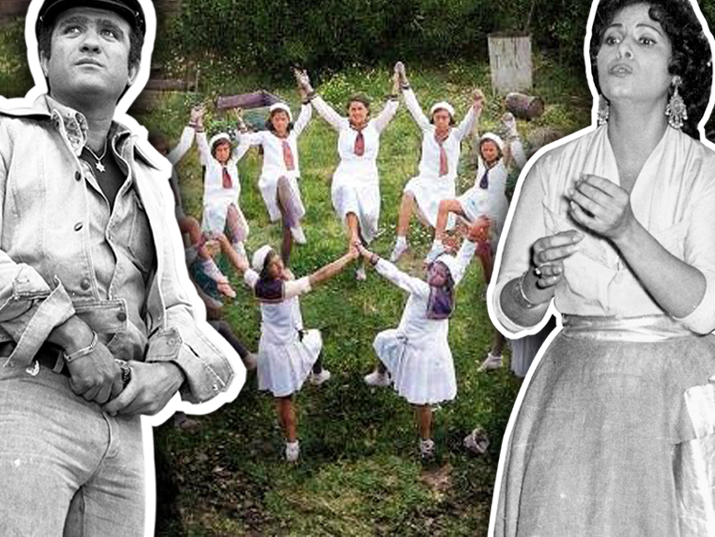 Love is in the air, the hot, muggy air. This year, the August heat, the full moon, and the Perseids meteor shower will coincide to create love – or something close to it – on Tu B’Av eve.

Tu B’Av – for those unfamiliar with this minor Jewish holiday with clearly pagan roots – falls on the eve of the 15th of the Hebrew month of Av, when the moon is full. During the Second Temple period, the date marked the beginning of the grape harvest. According to tradition, on that date, unmarried young women would go dance in the vineyards, dressed in white, to eventually be joined by the young men – hopefully in the bonds of matrimony.

The early kibbutz movement revived Tu B’Av as a day for celebrating the grape harvest, and a day for weddings. The modern State of Israel brought Tu B’Av back to what it probably always was – a good excuse to party all midsummer night long. However, given its history, Tu B’Av deserves a proper romantic playlist featuring 10 favorites. And where better to start if not with the Songs of Songs?

Search the National Library of Israel’s music collection using the category “love songs” and you’ll get a long and detailed list of sub-categories, like “suffering” and “unrequited” (the most common of this genre in any language, place, or time), but there are also “courtship”, “dreams”, “hope” – and the “fifteenth of Av”.

Most prominent under the sub-category “fifteenth of Av” is a recording of Kol Dodi (“The voice of my beloved”), as performed by its composer, Israel Prize laureate Sara Levi-Tanai, choreographer and founder of the Inbal Dance Theater. The Library’s recording is from the 1950s but the most famous version by far of this love song, which takes its lyrics from the Song of Songs, was performed by Shoshana Damari, whose archive is housed at the National Library of Israel.

Another melody penned by Levi-Tanai with lyrics from the Song of Songs was El Ginat Egoz, (“To the Walnut Garden”). The NLI music archive notes, “Written and choreographed straightaway as a folk dance in 1947, the song’s success gave birth to an entire genre of slow-tempo Yemenite-inspired dance-songs with the same hallmarks: lyrics taken from or in the spirit of the Song of Songs, structured in two short parts of two or four bars each, a melody based on a single motif with Eastern musical elements, and a 2/4 or 4/4 beat time signature, based on the Yemenite dance step.”

The Song of Songs also figures in the song Yesh Li Gan (“I Have a Garden”). First penned by Hayim Nahman Bialik in 1908 as poem of longing as spoken by an unnamed woman for her beloved David, who may or may not return to her garden, the text is similar in style to the biblical text. The melody from the 1930s, (mistakenly attributed as a Syrian folk song, but later rightly credited to the famous Egyptian singer-composer Sheikh Muhammad ‘Abd al-Rahim al-Maslub), was adapted by singer, songwriter, musicologist, and actor Bracha Tzfira. The Library’s collection also includes a performance by singer Nechama Hendel, recorded at the Kol Yisrael (Voice of Israel) public radio studios in 1961.

Another recording from 1961: Keshoshana ben HaHohim (“Like a Rose Among Thorns”). Composed by Yosef Hadar – one of the most important Israeli composers of the 1950s and early 1960s – the song was complemented by choreography by Yankele Levy, one of Israeli folk dance’s founding fathers. With romantic verses from the Song of Songs (Like a rose among thorns / So is my beloved among the young women / Like an apple tree among the trees of the forest / So is my beloved among the young men), Keshoshana ben HaHohim has become a couples folk dance standard.

The song Dodi Li, whose lyric also comes verbatim from the Song of Songs, (I am my beloved’s / and my beloved is mine), was originally set to music in 1948 by musician-composer Nira Chen. It became a popular folk dance in the 1950s, with the song performed by singers like Naomi Tzuri and groups like Lahakat HaUzim (also known as Lahakat HaHalutzim). Sometime in the late 1960s, however, the new generation of Israeli artists apparently felt the need to bring sexy back and allow the Song of Songs’ simmering passion to rise. Check out this hip version by jazz vocalist Rimona Francis.

No list of Israeli love songs would be complete without Erev shel Shoshanim (“Evening of Roses”). Composed by the aforementioned Yosef Hadar with lyrics by the poet Moshe Dor, which again borrowed imagery from the Song of Songs, it was first recorded in 1955 by singer Miriam Avigal and then in 1957 by Yaffa Yarkoni. But the song gained international fame with a version by singing duo HaDudaim. Following the Six-Day War, Erev shel Shoshanim became a hit throughout Europe, recorded in countless versions till today.

The dark-skinned female in the Judeo-Spanish song Morena, Morenica, a traditional Ladino cancionero with roots in old Spanish poetry, was perhaps inspired by the Song of Songs verse, “I am black and beautiful, O daughters of Jerusalem”. For centuries, this verse had been set to music; in modern Israel it was adopted by composers like Daniela Dor (pseudonym of Hungarian-born Barbara Kaufman), who wrote the song Schora Ani u Na’ava for the unusual four-octave vocal range belonging to Eritrean-born Yemenite-Israeli singer Hanna Ahroni.

Another song in Ladino, Avre Tu Puerta Cerrada (“Open Your Closed Door”), is among the most-loved and much-performed of the romancas – the Judeo-Spanish variation of traditional Spanish ballads of the Middle Ages. Doors, windows, and garden gates, whether open or closed, were frequent symbols in medieval Iberian poetry and song, and the lyric, from the would-be lover’s point of view, is an expression of deep desire.

The Library catalogue lists at least 40 other recordings, including those from a series of radio broadcasts in Ladino launched in 1954 by musicologist Yitzhak Isaac Levy, head of the Kol Yisrael ethnographic department. While these recorded performances – like this one from 1958 – represent an important resource for researchers, they are also hugely enjoyable, such as this swinging version by pop star – and Israel’s first Eurovision entrant (in 1973) – Ilanit.

However, perhaps the best-known version was recorded by Yehoram Gaon, in a 1969 album that broke Ladino music through to mainstream Israeli popular culture.

As the Mizrahi music genre began slowly gaining legitimacy within the Israeli music establishment, the “I am black and beautiful” verse – but with a far different melody – won first place in the 1977 Israel Oriental Song Festival. Sung by Shimi Tavori, the song Schora Ani u Na’ava started a winning streak that ended only in 1982 when Tavori opted out of the contest. This allowed the now-legendary Zohar Argov to step in, and win with the now-iconic – and Song of Songs-adjacent – HaPerach beGani (“The Flower in My Garden”).

There are hundreds more songs of romance, passion and longing to be found in the Bella and Harry Wexner Libraries of Sound and Song – Legacy Heritage Foundation at the National Library of Israel. These recordings span decades, and a multiplicity of languages – Arabic, English, French, Greek, Russian, Yiddish, and more – plus the universal language of love (or something close to it).