Jerusalem During the War of Independence—Now in Color!

The blockade of Jerusalem began during the first few days of the War of Independence, spreading from the Old City's Jewish Quarter to the rest of Jerusalem. These color photos from 1948 show us what life was like in the city that was cut off from the rest of the country… 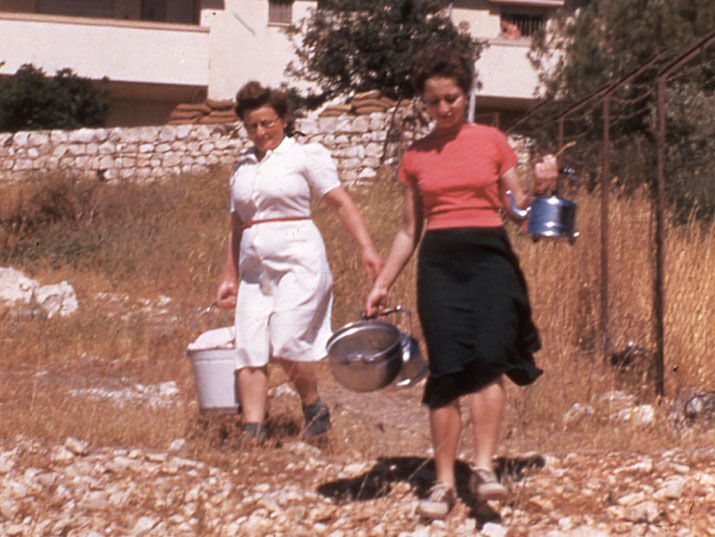 Going down to fetch water from the reservoirs during the blockade of Jerusalem. Photo: Moshe Marlin Levin, from the Meitar Collection, the National Library of Israel

It was the early days of Israel’s War of Independence, and Jerusalem was under blockade. The city had been placed under siege many times before. First came the Assyrians, then the Babylonians, followed by the Persians, the Greeks, the Romans, the Muslims, the Crusaders, the Ottomans, and that’s not even a complete list . Yet, this time, things were a bit different. For example, Jerusalem by this time had finally grown beyond the walls of the Old City. Another difference was the existence of the camera.

At first, it was just the Old City’s Jewish Quarter that was cut off from the rest of the city, but very soon, the Arab forces realized that all of Jewish Jerusalem was entirely dependent on the road to Tel Aviv and the coastal plain remaining open – this was the only route for bringing in critical food and supplies. In fact, a November 30th, 1947 attack on a bus traveling from Netanya to Jerusalem is often seen as the opening shot that set off the War of Independence. Later, the situation grew more severe when Jordan’s British-trained Arab Legion force took command of the campaign, following Israel’s declaration of statehood in May 1948. In late May, following a siege of several months, the Jewish Quarter in the Old City finally surrendered to the Jordanian forces, while the blockade of the road leading to Jerusalem remained in place. The convoys that struggled to reach the city (and also the nearby Etzion Bloc), the Israeli military operations which aimed to lift the blockade, the Battle of the Castel and the construction of the alternative “Burma Road” route to the coast—all these remain symbols of the War of Independence to this day.

As fate would have it, a man by the name of Moshe (Marlin) Levin was living in the city during the blockade period of 1947/48. Levin, born and raised in the United States, arrived in Mandatory Palestine with his wife in 1947. He quickly got a job as an assistant editor at the Palestine Post (which eventually became the Jerusalem Post), and later became the newspaper’s Jerusalem correspondent. During the War of Independence, he covered the war for the United Press news agency. Later, he founded and managed the offices of Time-Life Magazine in Israel, and worked there until he retired in the 1990s.

While the battles raged for control of the city and its access roads, Jerusalem’s Jewish residents—numbering nearly one hundred thousand at the time—got on with their daily lives. At least they attempted to keep up some semblance of routine. After all, they had to continue making a living. Levin’s camera gives us an extraordinary glimpse into those moments—and in color!

Most of Levin’s photos from the siege are personal ones: in them, you can see his wife Batya (Betty), and their friends Gershon and Ethel Agron, going about their daily activities during the war. Gershon Agron was the editor-in-chief of the Palestine Post where Levin worked, and later the mayor of Jerusalem. Even someone like Agron had to find ways to make ends meet during the blockade.

For example, in one of the photos, Betty Levin is seen walking with the couple’s housekeeper to fetch water in jugs and buckets—the regular water supply was cut off and people had to ration clean water. Another picture shows the three women carrying home a large water tank, one of many photos in the collection which feature Jerusalem’s residents carrying water in jugs. Water tanks were also installed on roofs in order to collect and store rainwater.

During the blockade, water shortages were a serious problem, and one picture shows Betty Levin exchanging half a loaf of bread with a monk in return for water. Food was also scarce, and in another photo, Levin holds up a bag of food rations she received. And what were the cooking conditions like during this time? Moshe Levin photographed his wife preparing food on an improvised stove in their backyard.

The food allotment was not always enough: Moshe Levin also documented people scavenging for food in trashcans, or a beggar sitting on a street corner asking for help from passers-by.

And in the midst of all this, daily life continued. Moshe Levin also documented the mundane, whether it was during a period of ceasefire or at other times. He photographed children playing in the street, his wife walking down Jaffa Street, and even nuns walking with parasols on King George Street. Despite everything, life went on.

Were you able to identify anyone in the pictures above? If so, please contact the National Library of Israel.