Home > History of Israel > Is This What the First Temple Looked Like?
Land of Israel 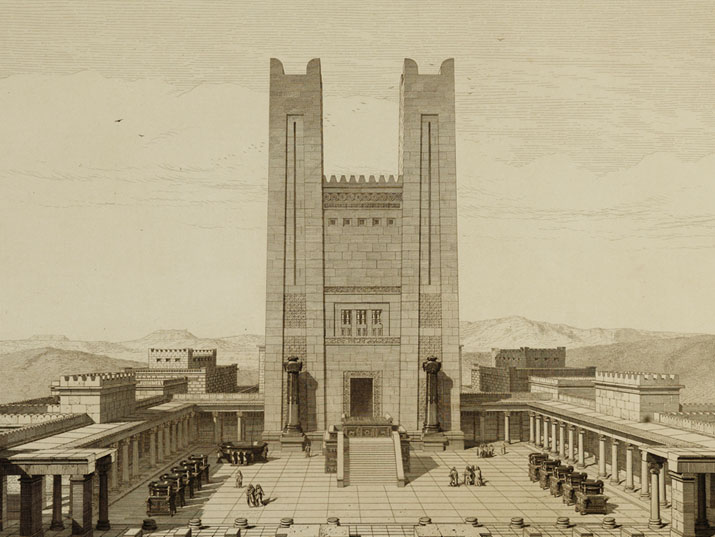 In the municipality storeroom of the northern Israeli town of Rosh Pina, a unique book sat undisturbed for years, its ornate illustrations and French text ignored by all. It would still be lying there, had the town’s former archivist, Hanna Chopin, not come across it one day. Once she began leafing through the pages, Chopin instantly knew she had a very special book in her hands.

One copy of the rare book is kept in the Louvre in Paris, another is preserved in the Rothschild family vaults, while yet another can be found here in the Eran Laor Cartographic Collection at the National Library of Israel. Two more copies  can be found in the towns of Rosh Pina and Zichron Ya’akov in Israel.

The rare books were given as gifts to the Jewish settlements of Rosh Pina and Zichron Ya’akov by Baron Edmond de Rothschild in the late 19th century. It is unknown whether there were additional copies donated to other Jewish agricultural settlements established by the Baron. Here we shall tell the story of the copy that is currently in the Rosh Pina archive. The book contains the following dedication: ‘Dedicated to the Rosh Pina colony by Sir Baron Edmond de Rothschild, Paris, September 21st, 1898.’ It is unclear exactly why the gifts were sent or for what occasion. In fact, we know very little at all about these books. We can tell you, however, that after Ms. Chopin found the Rosh Pina copy in its deteriorated state, the book underwent restoration at the National Library laboratory in 2013, with assistance provided by the Prime Minister’s Office. It was later transferred back to the Rosh Pina archive, where it remains to this day.

What is so special about this book that makes it important to restore and preserve? Well first of all, as a general rule, if Baron Rothschild gives you a gift, it’s probably a good idea to keep it in good shape and even display it proudly, just in case he decides to stop by. Secondly, as previously mentioned, this is a unique work, one of only a handful which exist worldwide. Lastly, the book contains vivid illustrations of the most significant architectural structure in Jewish history: The Temple.

The book was written by two French scholars: Charles Chipiez and Georges Perrot. Chipiez was an architect and architectural historian and Perrot an archaeologist. They wrote a number of books together which were dedicated to the history of the ancient world: Assyria, Persia, Egypt, Rome, Greece, and of course – Judah and its surroundings. Most of their findings regarding the Jewish Temple – which they saw as an architectural milestone in the history of the world – were published in a book printed in France in 1889, “Le Temple de Jerusalem et la Maison de Bois-Liban”. Rothschild, who took a special interest in Jerusalem and the Temple, discovered the book when it was put on display at an exhibition in Paris, and immediately purchased a number of copies which made their way to the farming colonies in the Land of Israel which were so dear to him.

The highlight of the book is its appendix – large, magnificent illustrations of the Temple and the ‘House of the Forest of Lebanon’ built by King Solomon, according to the First Book of Kings. The first chapter of Chipiez and Perrot’s book describes the history of the Temple, the structures that surrounded it and the local topography. In the second chapter, the authors explain which sources were used to reproduce the appearance of the Temple. The third chapter describes the Temple itself according to verses found in the book of Ezekiel, and the fourth and final chapter describes what the authors believed to be the palace of the kings of Judah (the Palace of the Forest of Lebanon) – according to their own knowledge. The authors also included sketches of architectural elements such as pillars, domes and capitals.

Dr. Smadar Sinai, a historian and the director of the Rosh Pina Restoration Association, says that Baron Rothschild had a special and understandable interest in Jerusalem and the Temple. According to Dr. Sinai, this stemmed from his traditional Jewish education, as well as from the growing interest in the scientific study of the Bible during the late 19th century. Other evidence suggests that the Baron sought to build a “hall” on the ruins of the Temple and even obtained plans from architects to integrate modern and ancient elements in the construction of a grand new building. The Turkish Sultan refused, for obvious reasons, to authorize the ambitious project.

Did Rothschild really dream to restore the Temple in its original location? Did he intend to disseminate architectural instructions for the construction of the Third Temple? Was he simply fond of the book because of its unique art? For now, we do not know the answers to these questions. But thanks to the Rosh Pina archive and the Archive Network Israel project, we can still enjoy the beautiful book today.

This article was written in collaboration with the Rosh Pina archive and with the help of the archive director, Yehoshafat Pop.