To Whom Did This Spy Dedicate His Legendary Love Letter?

Home > Hebrew Poetry > To Whom Did This Spy Dedicate His Legendary Love Letter?
Land of Israel

Although Avshalom Feinberg was only 27 years old when he died, he knew a true love or two... or five. Meet the many contenders for the title - “recipient of the most romantic love letter in the Hebrew language” 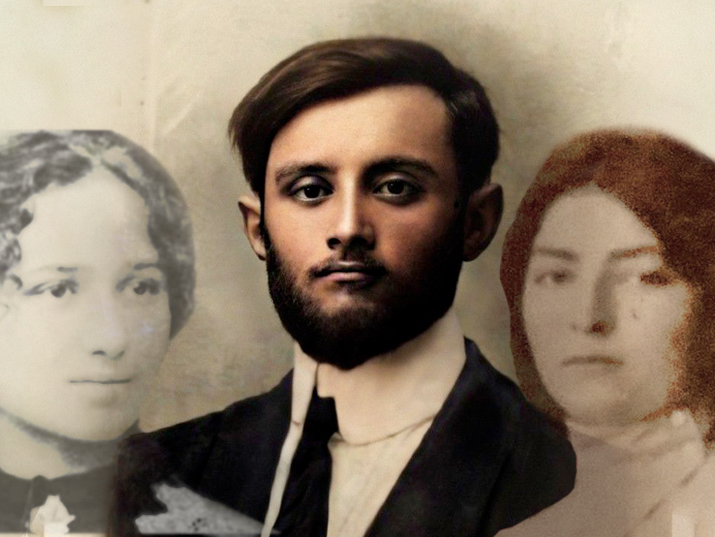 Avshalom Feinberg, 1915, the Ben Zvi Institute Archive. This item is part of Archive Network Israel, accessible through the collaboration of the Ben Zvi Institute, the Ministry of Jerusalem and Heritage and the National Library of Israel. Right: Raïssa Maritain, courtesy of the Feinberg Family Museum. Left: Miriam Kavshana, courtesy of the family.

The following is a story of unrequited love.

That is probably the best way to describe the Hebrew letter Avshalom Feinberg wrote in 1910 to an unknown lover. Originally titled “A Ballad of a Thousand Kisses,” the letter leaves us with very little information about the curly dark-haired and fair-skinned woman mentioned in it.

Did Avshalom really write this ballad for his one and only true love? Did such a person even exist? And if so – who was she?

Quite a few women could have potentially answered this question in the first person. The fact that they all managed to have some connection to Avshalom or at least a plausible case, paints a more rounded portrait of this young Zionist idealist, a master of words and serial heartbreaker.

Here are the known and indisputable facts: the passionate and inspiring poetic ballad was written in October 1910, just after Avshalom returned from Paris, and before he was about to leave for the research station in Atlit to join Aaron Aaronsohn’s agricultural enterprise in Palestine (Aaronsohn had by this point become world famous for his work as an agronomist and botanist. His research also served as a convenient cover for his espionage activities).

If we play detective for a moment, we can use the descriptions on the letter’s second page (which most readers don’t usually get to) to try to figure out the nature of the relationship and the depth of the intimacy between Avshalom and the letter’s intended recipient.

“I want to find this spring and put my lips to it, to glue my mouth to the spring of light and drink my fill, and that would be the thousandth kiss. But the sky does not favor my sinful eyes, the light does not favor my impure, earthly, drunken lips, and therefore this impossible kiss will burn my lips forever and trouble my wanting breast to the last breath.”

Who was the woman for whom Feinberg yearned when he transformed his passionate musings into words on a page? During our search to uncover the identity of this enigmatic figure, several candidates presented themselves. Each of them is from a slightly different time and place, but all have one thing in common: they were all beautiful young women who were at some point certain that they held the key to Avshalom’s heart.

The first claimant to the crown is Rivka Aaronsohn, who was officially considered his fiancée. Rivka was Aaron Aaronsohn’s younger sister and she and Avshalom had a close relationship. A co-claimant is her famous sister Sarah, who was apparently the closest thing to a soulmate Avshalom had.

Avshalom’s letters to Sarah and Rivka are full of emotion and various flowery descriptions. He occasionally wrote to both sisters together, using terms of endearment such as “my girls” and “my darlings,” but he also maintained a separate, much more intimate correspondence with each: “To my Sarah.” “To my Rivka.” “Yours, Avshalom”

“Oh! If I could only have flown yesterday before you and lined the whole path with beautiful flowers, placing a kiss on each flower in the hope that your feet would be good enough to touch them, how happy that would have made me.”

But even though Avshalom did not spare any kisses in the letters he wrote to the sisters, and despite the similarities that emerge here and there, the “thousand kisses” letter could not have been written for either of the two.

The Aaronsohn sisters were disqualified due to a discrepancy in the dates. The letter is dated October 18, 1910, and Feinberg would only meet the sisters later on.

The source of the confusion over this point is likely due to the fact that the letter was found among documents belonging to the Aaronsohn family, and is today deposited in the Beit Aaronsohn – Nili Museum.

Did Avshalom originally write the letter to an unknown woman, before later rededicating it to the red-haired Rivka or to the fair-haired Sarah? We’ll probably never know for sure.

Avshalom spent almost five years of his life in the French capital (from 1904 to 1909, with short breaks in Switzerland and Palestine). During his studies in Paris, he met Jacques and Raïssa Maritain through his revered aunt Sonia Belkind, establishing a strong friendship with the couple and becoming a frequent visitor in their home.

Jacques Maritain was a French Catholic philosopher and thinker. Raïssa Maritain was the daughter of a Jewish family that had immigrated to France from Russia at the end of the previous century, fleeing local persecutions of Jews. She met Jacques at the Sorbonne, fell in love with the gentle-faced young man and married him in a Christian ceremony against her family’s wishes.

The young couple had a strong bond. Raïssa testified in her diary that everything she did in her life and all the spiritual wealth she accrued was thanks to her husband. Jacques, in turn, later wrote that she was his inspiration, and that every one of his successful creative endeavors was due to her.

And yet, when Avshalom arrived at their home, he fell in love with the dreamy and beautiful young woman and she with him. Her sentimentality found an echo in the heart of this idealistic young man who was so different from her serious husband. Despite her failed attempts to lure him to Christianity, when they eventually parted, it was with the pain of lovers who know they will most likely never meet again.

Rumors and gossip about his French love followed Avshalom upon his return to Palestine. Despite this, he continued to maintain a correspondence with Jacques, writing to him from Hadera, Zichron Ya’akov and Atlit. Some of the letters, in fluent French and Yiddish, can be found in the archive of the philosopher André Neher, deposited at the National Library of Israel, but as far as we know, no personal letters to Raïssa were found among them.

Is it possible he wrote the letter for her but never sent it?

The dates certainly fit, as does the context: the unrequited love and the great distance that separated them, preventing Avshalom’s metaphorical kisses from reaching her.

The Beautiful Nurse from Jaffa

Miriam Kavshana was a young girl and an ardent Zionist when she and her older brother arrived in the Land of Israel from Plonsk, Poland. Other family members joined them later, but in the interval, Miriam worked as a nurse at the hospital in Jaffa.

There, as she would tell her family, she met Avshsalom. He was a young and charismatic patient; she was a dedicated and beautiful nurse. What could possibly happen?

We could not find any documentation of Avshalom’s hospitalization at that time, as few patient records remain from those years. Miriam’s relatives, however, have preserved a poem that was found among her papers. It was written by Avshalom Feinberg to a girl by the name of Miriam.

“It has been several days and several nights

that I have been lusting to see you Miriam

but to my great and bitter sorrow

this has proven to be

despite all of my toil, impossible

yet still, a glimmer of hope remains…”

– The opening lines of the poem Avshalom dedicated to a “Miriam”

But by 1911, Miriam had apparently moved to Yavniel, near the Sea of Galilee, with Haim Yaffe, whom she would soon marry.

Was Avshalom really in love with her? Was the “Ballad of a Thousand Kisses” written for her, precisely because he could no longer claim her heart, after Haim had taken her up north?

If so, one can only wonder what the happily married woman must have felt when she read these words, which may have been intended for her.

In family conversations, Avshalom’s beloved little sister Tsila brought up another name: Segula Beckman Razili. In the archives of the Khan Museum in Hadera there is another letter that Avshalom wrote to Segula, as well as an envelope addressed to her in his own handwriting.

Did the envelope ever contain the famous ballad? It is empty now, and the address on its back does not hint at its past contents.

Not much is known about Segula’s life, except for the fact that in 1918 she married Haim Resnik (later Razili).

Tsila was very close to Avshalom. Even when they were not in the same place at the same time, they maintained an extensive correspondence (in which the various women are described very differently from the romantic metaphors that filled his love letters). She probably knew him better than most of his friends, and it is logical to think that he shared his innermost thoughts with her.

There is only one problem with this theory: according to family sources, Segula was born in 1896. A simple calculation leads to the conclusion that in 1910 she was only 14 years old. Anyone reading the entire letter, beyond the highly publicized opening, will find this fact quite disturbing.

So, for whom were the thousand kisses really meant?

Does it even matter for whom the ballad was written?

The image that emerges from cross-referencing these stories with what we know of Avshalom’s role in Zionist history, is that of a young Jewish man whose heart overflowed with feelings of love. Love for his people, for his country, for his family. And yes, also for the girls and women he met in his life.

Thanks to his rich and expressive linguistic talent, even decades later, we can almost touch those warm feelings that were so abruptly ended.

Thankfully, Avshalom’s beautiful ballad to an unknown lover was preserved for future generations by songwriter Mirit Shem-Or who rearranged the words to music written by Svika Pick. The song, today a well-known Israeli classic, was performed by Yehoram Gaon in 1986.