An Egyptian Soldier’s Diary From the Yom Kippur War

Naji Ali, an Egyptian sergeant, documented a total of five days during the fateful Middle East conflict of 1973, leaving a chilling record of the war's brutality and the treatment of captured Israeli soldiers. The historic document recently surfaced in the collections of the National Library of Israel 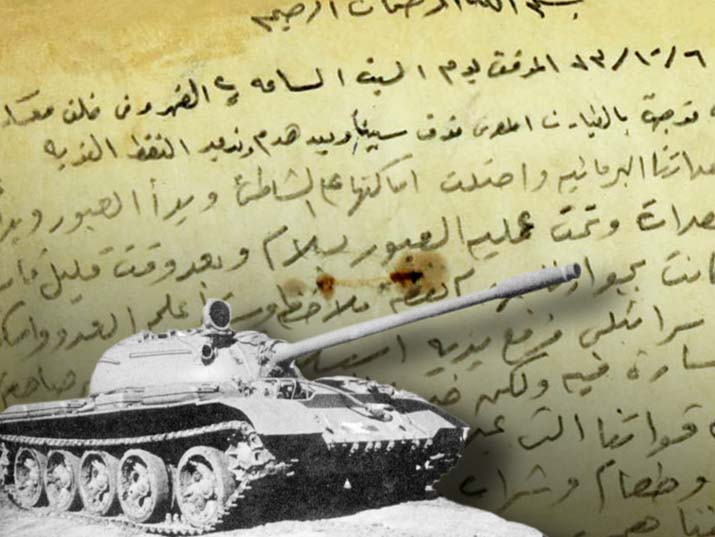 The notebook the Egyptian soldier carried with him during the Yom Kippur War was used for a purpose other than the one his commanders had intended.

The booklet was originally meant to be used for logging the test results of Soviet “Sagger” missiles transferred to Egypt in preparation for the next military confrontation with Israel. One page of the notebook in question was indeed used for this original purpose, from which we learn that the missile examined by this particular soldier was found to be in good working order. But when the fighting broke out on October 6th, 1973, the notebook was repurposed into a personal diary, and on its cover the soldier inscribed the Arabic word for “Memoir”.

We don’t know the soldier’s full name. The diary only mentions the name “Naji Ali”. Other than that, the author offers very few personal details besides being a “health sergeant” of the Third Army’s Seventh Division. In other words, he likely served as a medic.

Shalufa, located on the west bank of the Suez Canal, north of the city of Suez and south of Ismailia, was known as a frequent and bloody point of conflict in the history of Israeli-Egyptian warfare, stretching back to the Sinai Campaign of 1956. The war broke out on a Saturday, at midday, Yom Kippur, 1973. On that first day of war, Naji Ali crossed the Suez Canal and was among the Egyptian forces that moved into the Sinai Peninsula via Shalufa. The documentation from this fateful day, in which Naji Ali describes his first encounter with IDF soldiers and the transfer of equipment from the Shalufa camp to the east bank of the canal is perhaps the most difficult section of the text. Apparently, the events described happened at the Lituf military outpost, an Israeli position on the eastern bank of the canal.

The surprise attack was a success and the Egyptian army not only took the frontline outpost, but also captured Israeli prisoners of war. The callous reporting of the cruel treatment of the captives is shocking to read:

We flew in Egyptian planes over Sinai and after destroying the strong positions, we drove amphibious vehicles, landing on positions on the coast and started crossing with our vehicles. The crossing was quiet and without any particular issues. A while later, a civilian position next to us was attacked. The enemy flag was lowered. We captured an Israeli soldier and he surrendered and raised his hands. We did not shoot him because it was pointless. We beat him instead with our boots until he was dead. Then we moved all the equipment like ammunition, tanks, food and drink to our forces that had already crossed.

This is the most chilling passage in this short diary, and it appears right at the beginning. The documentation shows that at this stage the Egyptians did not try to transfer the prisoners to detention, but intended to get rid of them quickly and without wasting their ammunition.

Once the attacking forces were stationed in the area, the author listed the supplies delivered to them: food, ammunition, and artillery. The Egyptian wounded were treated by a colleague named Hassan.

Although Naji Ali called his diary a “memoir,” his tone on the second day of the war was propagandist. Reading his words, one can imagine listening to a Radio Cairo broadcast of the war:

The fighting continues for the second day.

The forces are constantly advancing with incredible victories, shooting down some of the enemy planes and tanks.

Except for one position that retaliated strongly and aggressively and caused a limited number of casualties, but we took care of them quickly.

The outpost attacked vigorously and despite our forces’ attempts to stop it, it continued to attack but failed to fend off our offensive. That day we managed to lower the enemy flag and hoisted our Egyptian flag on the soil of Sinai on the eastern bank of the canal. Praise God.

Documentation of the third day of the war once again demonstrates the intensity of the Egyptian soldiers’ hatred of the Israeli enemy. This time, captured IDF soldiers narrowly escape death:

We managed to cross the canal again; we moved some of the equipment and ammunition.

With God’s help, we managed to permanently silence position 149 [the same outpost that had resisted aggressively the day before, apparently a reference to the Lituf outpost].

So the whole area is more or less calm except for the aerial shelling.

When we silenced it [position 149, apparently] our forces captured the area around the position.

We were given a signal to go to the shore and bring three enemy prisoners. We beat them, aggressively. The soldiers surrounded them and wanted to drink their blood. But the leaders [the officers] prevented this in order to question them and extract information.

The fourth and fifth days of the war are documented in the Egyptian soldier’s diary without any particular incident of note. Once the “strong position” was subdued, Naji Ali’s unit concentrated on preparing the equipment and supplies for further combat and military advances into the interior of the Sinai Peninsula. The equipment included a bottle of Coca-Cola collected from the occupied Israeli outpost:

In the morning at 6:00 we ate breakfast [written here: “over four Israeli planes” – likely referring to planes that crashed, C.M.] and then I moved to the eastern bank. I went to the strong position and brought back a fork, a Coca-Cola bottle, and two other items [unclear]. And the day ended peacefully.

The diary concludes with documentation of the fifth day of the war. This was Wednesday, October 10, 1973. Naji Ali noted that he showered for the first time in ten days. He ended his diary thus:

I loaded ammunition and weapons in the afternoon. I went back and was amazed to discover five more cars loaded with ammunition. I passed them safely. The day is over.

Due to the diary’s brevity, we were able to follow the entire course of documentation up until the abrupt ending on the fifth day of the war. The Yom Kippur War would last for two more weeks, with the momentum swinging in Israel’s favor on October 15th, when the IDF managed to cross the Suez Canal and establish a bridgehead on the western bank.

What does the diary’s sudden end say about the fate its author, Naji Ali? Did he lose his diary during the fighting? Was he killed in combat? We simply do not know.