The Circassians in Israel: From the Caucasus Mountains to the Galilee

Home > History of Israel > The Circassians in Israel: From the Caucasus Mountains to the Galilee
Land of Israel

A look at the heritage, ethos and culture of the Circassians or “Adyghe” - one of the most interesting and unique minority communities in Israel. Expelled from their homeland in the Caucasus Mountains in the 19th century, they settled in three villages in the Land of Israel, two of which survive to this day… 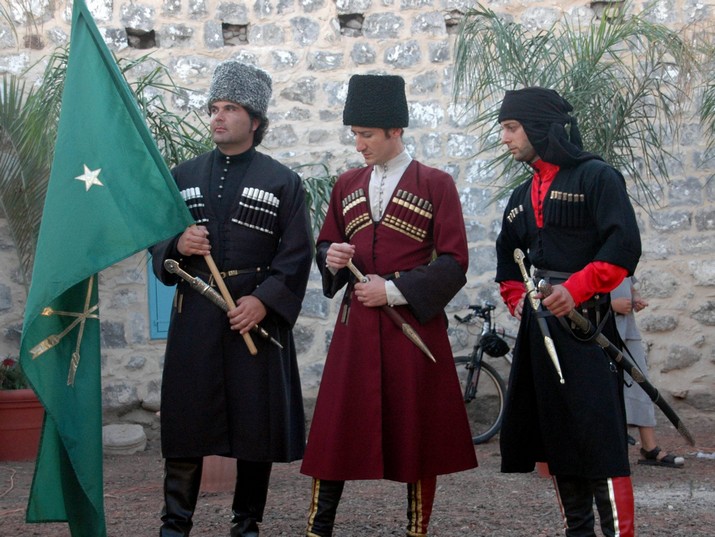 Every child raised in the Israeli school system is educated and brought up on the Israeli ethos, including its days of remembrance: Holocaust Remembrance Day, Memorial Day for Israel’s Fallen Soldiers, Yitzhak Rabin Memorial Daym, as well as other official days of remembrance and commemorative events. However, two high schools in Israel, Kadouri and Sasa, both in the northern Galilee region, mark yet another date:  the Circassian Day of Mourning, which commemorates the Circassian genocide and the exile of the Circassian people from their homeland. The reason these schools mark this day is that they serve the residents of the Circassian villages of Kfar Kama and Rehaniya, where the vast majority of the Circassian population in Israel lives. This is one of the most unique population groups in Israel, and despite its limited size, it occupies an important place in local and general history.

From the Caucasus Mountains to the North of the Holy Land: The Circassians as an Exiled People

The Circassians, or “Adyghe” as they call themselves in their language, are a people originating from the northwestern Caucasus, a region located east of the Black Sea, between Russia, Turkey and Iran. The Circassians lived in relative freedom in their homeland without establishing a “state”, and were generally divided into 12 separate tribes (although in practice there were apparently additional sub-groups as well). By the end of the 18th century, these people collectively saw themselves as “Adyghe” – Circassians. The Russian Empire attempted to conquer the region with the aim of annexing the Caucasus and settling other populations there. Circassian opposition to Russian colonization lasted for about a hundred years. These difficulties led the Russians to take extreme action, and in the final stages of the war (1860–1864), they burned hundreds of villages and engaged in ethnic cleansing, targeting the entire Circassian population. Most of the survivors were expelled from the Caucasus, and about a million of them found refuge in the territories of the Ottoman Empire, including the Land of Israel.

Originally, there were three main Circassian settlements in the Land of Israel, of which two remain: Kfar Kama and Rehaniya; the third settlement, near the town of Hadera, was abandoned due to an outbreak of malaria. Throughout the 19th century, the region of the eastern Lower Galilee, where Kfar Kama was founded, was under the de facto control of Bedouin tribes. The Ottoman government tried to impose its rule over the region in various ways, settling Maghrebi migrants from Algiers there and sending Kurdish battalions to confront the Bedouin, but with little success. The arrival of the Circassians changed things and effectively paved the way for Jewish settlement in the area about twenty years later. The “Old Village” complex in Kfar Kama, founded in 1878, reflects the conditions in the Land of Israel at that time. In the Caucasus, the Circassian villages were built over large areas, with houses constructed close together, thereby creating a defensive wall around the village’s public spaces for reasons of security and defense.  Kfar Kama is one of the most impressive surviving examples of local construction from the late 19th century and early 20th century in the Land of Israel.

Wherever they went, the Circassians often brought modernization along with them. Besides the Galilee, they established 13 settlements in the central Golan Heights, while also settling across the Jordan River, where they established the modern city of Amman. They introduced advanced construction methods, metal and woodworking techniques, a mixed economy, and also incorporated European architectural styles, such as the famous “Marseille tiles” still visible in their villages. Kfar Kama became an important regional center in the late Ottoman and Mandatory periods. They built a modern mill in a central area of ​​the Old Village which became a meeting place for all of the area’s inhabitants—Arab peasants, Bedouins, Jews and the local Circassians. In the 1948 war, the Circassians chose to fight alongside the Jews, and ever since then they have fulfilled their compulsory service in the IDF.

The Circassians are a people and not a “sect,” as they are sometimes mistakenly referred to in Israel. They are a national minority community in Israel that maintains a robust relationship with kinfolk in Israel and abroad, as well as their desire to return to their homeland. At the same time, they are also Israeli and are completely integrated in all aspects of life in the country. While the Circassian population in Israel numbers only 5,000 people (out of several million in the Circassian diaspora), they are perhaps the most active Circassian group in terms of preserving their extensive heritage, as well as the memory of the genocide and expulsion from their homeland, which is commemorated on their Day of Mourning, May 21. Moreover, the Circassians in Israel work to preserve the Adyghe language.  Adyghe, which had been a spoken language only, became a written language in the 19th century (although the Circassians also had a well-developed and unique graphic marking system, which is now preserved mainly in various family symbols). The language has no less than 64 consonants and is taught in elementary and middle schools. Every Circassian child learns Hebrew, English, Adyghe and Arabic, and some also study Russian and Turkish. The schools in Kfar Kama and Rehaniya are the only ones in the world where the students are Muslim and the language of instruction is Hebrew.

The “Adyghe Xabze” and the Circassian Ethos

Most Circassians are Sunni Muslims. They adopted Islam at a relatively late stage, having previously been Christians, and pagans before that. Nevertheless, whether Muslims or Christians, Circassians have a single code of conduct, called Xabze, that guides the way they live. This is a set of laws, a code, which directs their daily behavior and wields great influence on their education and values. In addition, the Adyghe have their own mythology and folktales. Their epic Nart sagas are continually passed down, from generation to generation, telling the stories of various Caucasian folk heroes.

The word Adyghe means “person of virtue” and Adyghe Xabze refers to the traditional way a Circassian is expected to behave. Adherence to this way of life is very important, and those who do not respect the custom must bear the burden of hinap – “shame”. The Xabze code guides education, the rules of society and honor, marriage, ceremonies and daily conduct. Most Circassians prefer to marry among themselves in order to preserve their ethos. Besides their customs, the Circassians continue to preserve their traditional music and dance. The traditional clothing—chiefly the Circassian warrior’s coat, featuring special pockets across the breast for bullets – is worn mainly for the traditional Circassian dance.

The Circassians have integrated into Israeli society in many ways. In the past, many continued to serve permanently in the security forces after their compulsory service. Many others work in all sectors of the economy, as researchers and scientists, educators and industrial workers. Many leave for a period to study, but most choose to return to live in their villages. The Circassians have also integrated into Israeli society in sports: Bibars Natkho, the captain of Israel’s national soccer team is a Circassian from Kfar Kama; his late cousin Nili Natkho, who was killed in a car accident, was a promising, young basketball player who led her teams, Maccabi Raanana and Elitzur Ramla, to the national championship and cup. The Circassian population in Israel stands out for its high percentage of recipients of higher education, and in recent years, a special curriculum has been developed specifically for Circassian schoolchildren.

In the early 20th century, with Jewish farms and colonies already established in the Galilee, the Jewish immigrants of the Second Aliyah came to an important realization: Jewish workers were not enough; there was also a need for Jewish guards and watchmen. However, regardless of the desire for Jewish independence in security affairs, there was a tradition that the Circassians of the Galilee held a central place in securing the Lower Galilee region. David Ben-Gurion, upon visiting the Jewish settlement of Sejera where the Bar-Giora Jewish defense organization (later Hashomer) was established, took note of the qualities of the neighboring Circassians from Kfar Kama, “resolute and gallant of spirit, excelling in bravery and courage,” and added the familiar Arabic saying: “Fish akhbar min cserkes” – “None are greater than the Circassian”. Eventually, the people of Hashomer established a Jewish defense in the Galilee, and even gained the respect of the Circassians, after proving their grit.

Kfar Kama is built over the ruins of an ancient Byzantine village, and the mosque is built of basalt stones, in a style drawn from another period when Circassians lived in Israel—the Mamluk period. The Mamluks, military slaves in the Muslim Empire, at one point managed to make themselves rulers. The Mamluk Burji dynasty, which ruled Egypt for 132 years, was of Circassian origin. The most famous of the Mamluk rulers, however, was the Sultan known as Baibars, after whom the captain of the Israeli national soccer team, mentioned above, is named.

If you happen to visit the Old Village, pay attention to the details, to the construction of the houses, and most importantly, speak to the locals, who are known for their hospitality. It is also highly recommended to taste the delicacies of Circassian cuisine, especially the traditional Circassian cheeses and pastries which can be bought in the village. You can also visit Kfar Kama’s Circassian Heritage Center and museum, where you can learn more about how the Adyghe commemorate their history and preserve their culture.