This Was the Actual First Zionist Congress

We are often told that “the Jewish state was founded in Basel", the city where the first Zionist Congress convened. However, 15 years earlier, Jews gathered in the city of Focşani, in Romania, to promote the settlement of the Land of Israel. Israel Gilad, a member of the First Aliyah Association and great grandson of the founders of Rosh Pinna and Zikhron Ya'akov, would like to remind our readers of those who came before Herzl… 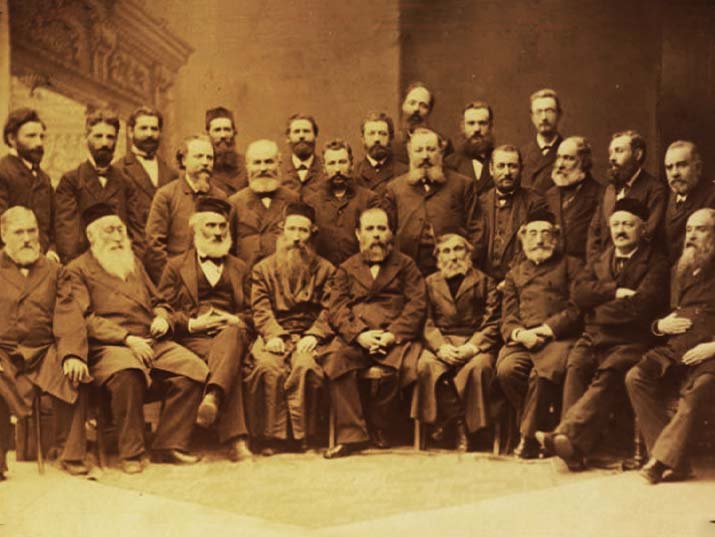 Participants in the Hovevei Zion conference in Katowice, 1884, the Pritzker Family National Photography Collection, the National Library of Israel

In 1878, Europe’s great powers convened at the Congress of Berlin to divide up the spoils of Russia and Romania’s victory over the Ottoman Empire in the Russo-Turkish War. Romania and Bulgaria afterward declared independence, pledging to grant citizenship to all residents. Leading this effort were British Prime Minister Benjamin Disraeli and French Minister of Justice Adolf Crémieux. Disraeli was a descendant of a Jewish family that had converted to Christianity, and Crémieux was himself a Jew.

Romania did everything it could to thwart this move. It now enforced laws legislated years earlier that discriminated against the country’s Jews and ruined their livelihoods. The laws had not been implemented previously. These actions, which worsened the already harsh reality of Jewish life in Eastern Europe, also spurred Jews to support the idea of a ​​return to the Land of Israel, a notion that began to spread among the Jews of the region.

In late 1880, David Gordon, the editor of the Jewish newspaper Hamagid, published an article analyzing the efforts to organize settlement associations for the Land of Israel. His conclusion was that small organizations or individuals would fail in their goal of “establishing a large agricultural settlement for our people in the land of our ancestors.” He believed that a strong central body, similar to French Jewry’s “Alliance” organization, which would oversee the organization and settlement, should be established.

The renewed Jewish settlement in the Land of Israel had only two colonies at the time, Gei Oni (later to evolve into Rosh Pinna) and Petah Tikva, which were established in 1878 with the aim of creating an agricultural settlement that would provide a living for its residents. Gei Oni’s residents had to abandon their settlement due to agricultural failure, while the people of Petah Tikva suffered from a very severe bout of malarial fever. By early 1880, the founders of both colonies were forced to return to Safed and Jerusalem where they survived on halukkah funds (charity collected from Jewish communities in Europe and distributed to the Jewish residents living in the Land of Israel).

Gordon’s idea was simple: the basis for organizing would be local associations that would purchase land in Palestine; each colony would appoint a certain number of peasant families (up to 150 households, as per the sultan’s permission) to work it, with the settlers making their living from agriculture. Gordon believed that a large number of colonies would eventually lead to the recognition of the Land of Israel as the homeland and state of the Jewish people.

On March 13, 1881, the Russian Tsar Alexander II was assassinated by a terrorist group. Among its members was a Jewish woman. Pogroms against Russian Jews ensued and continued for about three years. The pogroms, known among Jews as the “Storms in the South”, motivated groups in Russia to organize for immigration to Palestine. The Jews of Romania, realizing that the events in Russia would soon spread, ramped up membership in Zionist associations as well.

The Focşani Congress, the Beginning of Settlement, “Hibat Zion” and the Zionist Organization

I would claim that the Zionist movement was founded on December 30, 1881 (according to the Julian calendar), in Focşani, in Romania, at the actual “first Zionist congress”, which was attended by 51 delegates from 32 settlement organizations who met in the town’s Jewish school. The conference lasted two days, during which five members were elected to serve as the “Central Committee for the Settlement of the Land of Israel and Syria”. Samuel Pineles, a Zionist activist from Romania, was elected committee chair and secretary. Pineles, a wise and skillful organizer, ran the conference with a deft hand, knowing when to act decisively and when to be flexible, depending on the circumstance.

The movement founded at the Focşani Congress, which would later be renamed Hovevei Zion (“Lovers of Zion”) or Hibat Zion (“Love of Zion”), set as its goal: “the solution to the problem of Romanian Jewry by immediate immigration to the Land of Israel, agricultural settlement and independent work on the part of the settlers.” In his Hebrew book The Torch Was Lit in Romania (Ha-Avuka Hudleka Be-Rumanyah), Moshe Schaerf writes that the Focşani Congress “was a new phenomenon in Jewish history.”

And thus the central committee for the first Jewish settlement movement in the Land of Israel came into being. It financed and managed the establishment of two colonies: Zikhron Ya’akov, which it managed fully, and Rosh Pinna to which it only provided assistance.

The committee sent about 120 families (over 600 people) to Ottoman Palestine on four voyages, which brought more than half of the first wave of settlers. The first Zionist pioneer group to arrive was a group from the city of Moineşti, which bought the land at Gei Oni on which they established Rosh Pinna.

Samuel Pineles led the Zionist movement in Romania until his death in 1928, with the exception of about five years during which he turned his attention to personal business matters.

Unfortunately, in the spring of 1883, the Central Committee for the Settlement of the Land of Israel and Syria went bankrupt. In late September of that year, the committee transferred the assets of the colony it had founded, Zikhron Ya’akov, to the patronage of Baron Edmund James de Rothschild.

During Sukkot 1882, Baron Rothschild met Rabbi Mohilever, who was accompanied by Rabbi Zadoc Kahn, the Chief Rabbi of French Jewry. The Baron agreed to Rabbi Mohilever’s request to found a settlement in Palestine and later offered an economic safety net for most of the first wave settlements, which had fallen into bankruptcy. The Baron’s philanthropy prevented the settlements’ collapse which, had it indeed happened, could have led to a great crisis of faith regarding the Zionist goal.

In November 1884, the Katowice Conference convened and officially established the “Hibat Zion” movement and with it, the movement’s leadership passed from Romanian to Russian Jewry.

We must admit that as a movement, Hibat Zion was a failure in terms of its ability to motivate pioneers and settle them in the Land of Israel. The movement operated in “bursts” that were primarily reactions to pogroms and institutionalized antisemitism. When Theodor Herzl appeared on the scene, the movement’s leadership in Eastern Europe was happy to pass the baton of the entire Zionist movement to him.

In August 1897, the “First Zionist Congress” convened in Basel—but as stated at the outset, I reject this official title. If one begins the counting at the Focşani Congress, the Basel congress in 1897 was the seventh gathering.

Herzl was an exceptionally talented journalist, and the revered leader of the Zionist movement who even financed its activity from his own pocket. He founded the World Zionist Organization at the Basel Congress and built an impressive administrative apparatus compared to those that preceded it. Nevertheless, the Zionist Organization’s practical achievements in its early years were minor at best.  In the first few years, membership in the movement dwindled, political Zionism could boast few accomplishments, and the organization’s settlement activity in the Land of Israel was negligible until about 1910.

The Collapse and Rescue of Settlement in the Land of Israel

Baron Rothschild’s agreement to sponsor settlement in the Land of Israel and save it from collapse should not be forgotten. The founding fathers of Jewish settlement in Ottoman Palestine however paid the price by losing their independence and becoming day laborers for the Baron. I believe that the time has come for us to acknowledge our indebtedness to those early pioneers and give them their due.

David Ben-Gurion recognized Baron Edmund de Rothschild as the only one entitled to a place of honor in the Zionist story for doing more for the settlement of the Land of Israel than any other person or body. By this, Ben-Gurion minimized the actions and hard work of the organizations and pioneers active from 1882 to 1897, that preceded Herzl’s World Zionist Organization.

All this started a hundred and twenty-five years ago when the Congress in Basel was called the “First Zionist Congress” even though its full name was “The First World Zionist Congress.” The Congress in Basel was in fact the seventh of its kind. To this day, most Jews are unfamiliar with the first congresses of the Central Comittee for the Settlement of the Land of Israel and Syria. I have published my findings here in the hope that historians will one day correct this historical oversight in the common Zionist narrative.