In December of 1933, a 12-year-old Hannah Senesh composed a Hanukkah poem that concluded with the words: “These candles encourage us at every turn, fear not Israel, the time is yet to come." 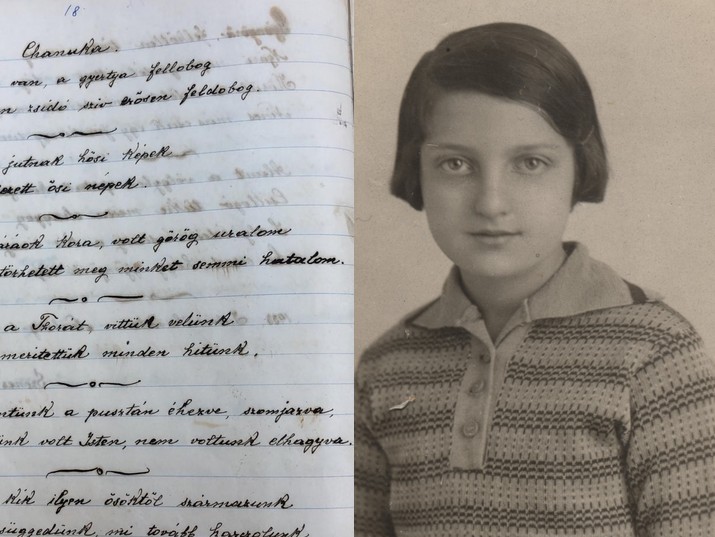 Hannah Senesh was born and raised in Budapest, in an urban Jewish environment that was well-versed in the trends and fashions of Hungary’s cultural elite. In her teenage years, she cultivated her literary talent by writing diaries and poems. Her ambition was to continue in the footsteps of her father, Béla Szenes, an acclaimed writer, journalist and playwright in Hungary who died prematurely, at the age of 33.

Among Hannah Senesh’s archival materials deposited at the National Library of Israel in 2020, is a notebook containing poems she wrote in her youth starting from when she was just seven years old. She would dictate her poems to her maternal grandmother, Fini, who would write them down in beautiful and neat script in special notebooks that are now preserved in Jerusalem. The poems that Hannah wrote throughout her childhood years reveal her sense of grief following the death of her father, as well as her joy and excitement at the changing of the seasons and the transformation of the landscape in her native Hungary,

However, alongside these writings dedicated to her homeland and her own personal experiences, there is also one surprising poem dedicated to the festival of Hanukkah. Senesh wrote this one on December 10, 1933, when she was only 12 years old. The Senesh family were not particularly religious, and it appears that Hannah wrote the poem while attending the Baar-Madas school in Budapest.  Though Baar-Madas is a Calvinist institution, the poem was likely written after one of the “religion lessons” given to Jewish girls who attended the school.

Senesh’s mother Katrina brought these notebooks to Israel, and the poem was later translated into Hebrew by the poet Avigdor Hameiri, on the occasion of the publication of the book Hannah Senesh: Her Life, Mission and Death (Hebrew), on the first anniversary of her death. 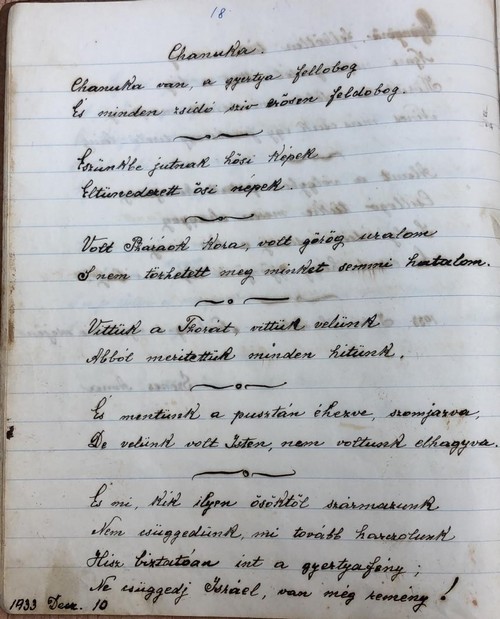 Here is a translation of the poem into English:

On Hanukkah, the candles are kindled, every Jewish heart quivers;

In our hearts rise up images of nations long since passed, ancient and great;

Of the days of Egyptian suffering, the kingdom of Greece, and our strength was not broken by any foreign rule;

We carried our Torah from place to place, from which we drew our faith and virtue;

We wandered through the wilderness, hungry and destitute, but God is with us – we will not be alone;

And we are descended from the same fathers, we will not give up. But will stay and fight;

These candles encourage us at every turn, fear not Israel, the time is yet to come.

Despite her young age, the poem already hints at the spirit of national pride and determination that would characterize Senesh in her adulthood, and also the impression left by Hanukkah’s nationalist ideas on her youthful soul.

The Senesh Family Archive is deposited at the National Library of Israel, with thanks to the Eisen Family.