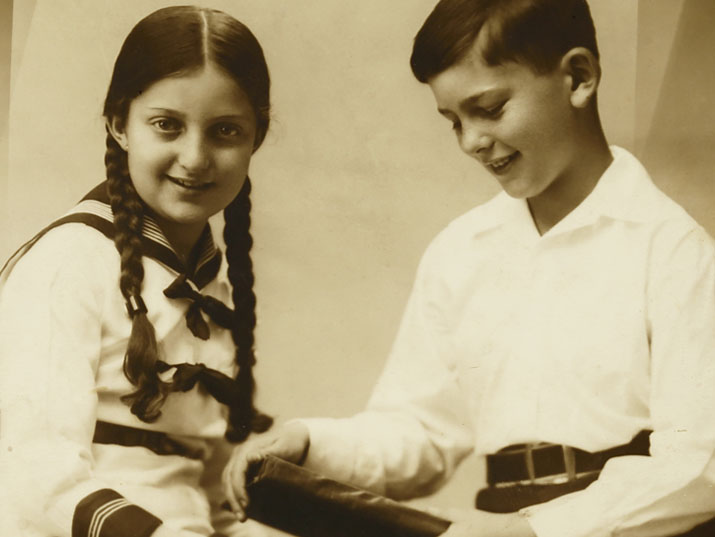 Hannah Senesh and her brother Giora as children, from the Senesh Family Archive, with thanks to Ori and Mirit Eisen

Hannah Senesh was born into a home where writing was an integral part of family life. Her father, Béla, was a well-known journalist, playwright and children’s author in Hungary. His books sold well and his plays were very popular in Budapest—but his short career ended abruptly with his sudden death from a heart attack at the age of thirty-three. Hannah (nicknamed Anikó) was then only six years old.

It soon became apparent that little Anikó had also been bitten by the writing bug. In November 2020, the Senesh (often spelled Szenes) family decided to deposit the entire Hannah Senesh Collection with the National Library. It includes dozens of items gathered throughout Senesh’s all too brief life. A number of these rare items document the very beginning of this creative girl’s journey.

Senesh was “writing” even before she actually knew how. She dictated to her brother Giora (Györi) a greeting for her grandmother and mother. When she started composing poems in her head—at the age of six!—Grandma Fini made sure to write them all down by hand in a notebook she kept just for that purpose.

Shortly after, Hannah, still a child of 7 or 8 years old, tried her hand at a career similar to her father’s. She felt that the Senesh family needed its own newspaper, and she would be the editor-in-chief! Thus came into being the family newspaper she called Kis Szenesek Lapja (“The Little Seneshes’ Newspaper”).

For several months in 1929, Anikó edited her own little newspaper. At the top of each issue was the date, just like in any proper paper. Hannah typed everything on the home typewriter. She wrote the articles, chose the poems and stories and drew the illustrations for the enjoyment of the whole family. She even attempted to write an entire play. This newspaper will also soon be available for viewing at the National Library of Israel.

The complete Hanna Senesh Collection reveals the creative roots of the person who would come to be remembered in Israeli and Jewish collective memory mainly as a brave paratrooper. She began creating even before she could write. Her early work is in Hungarian, but soon after arriving in Mandatory Palestine, she very quickly gained command of the Hebrew language and continued writing in Hebrew as well. Hannah Senesh remained a writer throughout her life, from her early childhood to her very last days in a Hungarian prison.