The alternative currencies set up by the Nazis in ghettos and concentration camps across Europe served to establish a false sense of "normalcy". 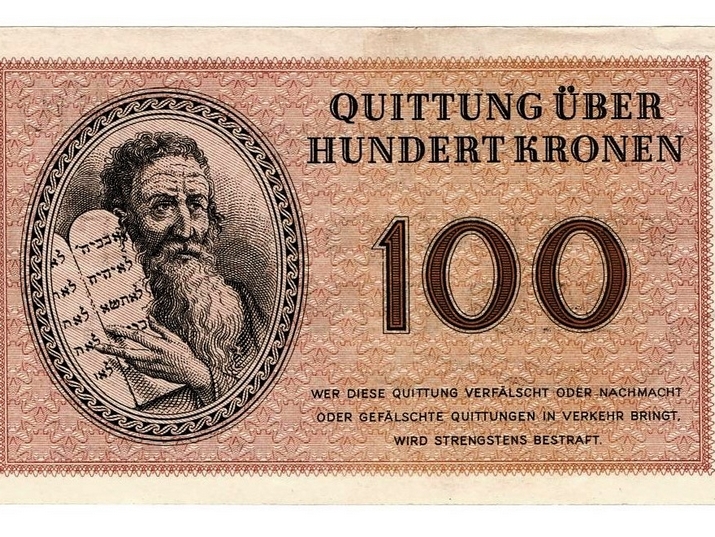 A bill (formally, a "receipt") from the Theresienstadt Ghetto, representing 100 Czechoslovakian crowns, the National Library of Israel collections.

When the Nazis came to power in Germany in January 1933, they began persecuting all opponents of the new regime, with the Jews of Germany automatically included in that category. Within just a few weeks of the National-Socialist political victory, thousands were arrested: social-democrats, communists, other members of the opposition, and Jews. These people were imprisoned in jails and concentration camps that had been established at an earlier stage. Among the first camps were Dachau, Ravensbrück, Buchenwald and Oranienburg-Sachsenhausen. At the Oranienburg-Sachsenhausen Camp, located near Berlin, the Nazis for the first time minted currency for use within the camp – bills that had no value beyond its fences. This arrangement was replicated in a few other concentration camps and ghettos, first in Germany, and subsequently in other occupied European countries.

There were several reasons behind the production of these special bills – in most cases at a low denomination. First, all camp prisoners – and later, all ghetto residents – were forced to convert their money and some of their property into the currency of the camp or ghetto where they found themselves imprisoned. In this manner, the Nazis could immediately place their hands on the personal property of prisoners and use it for their own purposes. Secondly, owners of the currency were unable to purchase anything with local currency outside the borders of the camps or ghettos. This was important in the interest of preventing escape: The moment prisoners succeeded in fleeing the camps, they had no means of acquiring food or clothes, posing significant obstacles to escape plans. In addition, the conversion of ordinary currency into alternate bills gave the prisoners a sense of being disconnected and marginalized from the general society. Moreover: the bills for the various camps were not uniform. Each camp had different modes of payment and there were also camps where bills or other alternate means of payment were never issued. It is no secret that the Nazis well knew how to use psychological means of this type to humiliate their victims.

Some camps invested in the design of the currency and even printed double-sided bills. Examples include Oranienburg-Sachsenhausen, Westerbork (in Holland) but also the Lodz Ghetto (which also minted coins) and Theresienstadt (Terezin). Naturally, in the ghettos, all of the prisoners were Jews, and ironically, this was reflected in the bills. The bills from the Lodz Ghetto depicted a Star of David. The same symbol appears on bills printed for use in the Theresienstadt Ghetto in Czechoslovakia (most of which was occupied by the Nazis prior to the outbreak of WWII). The denomination of the bills was not the German mark, but rather Czechoslovakian crowns (koruna). The Nazis issued and printed bills, formally called “receipts” (Quittungen), which were attributed different values: one, two five, ten, twenty and even one hundred crowns. It is known that these bills were printed in relatively large quantities – sometimes even millions of copies – but there are many “receipts” that show no signs of use whatsoever, mainly those with a high nominal value.

Apparently, large quantities of these bills never entered into circulation. In any case, the local bills of high denominations had no real use, since in the ghetto, there were no high-value goods available that prisoners could purchase. These bills feature an illustration of Moses holding the ten commandments. Tellingly, the commandment “Thou shalt not kill” is hidden from view – a subtle, and likely intentional effort on the part of a Jewish artist to express a measure of protest at what was taking place across Europe.

There was even an active bank in Theresienstadt which was responsible for the bills, and these bore the signature of the local “Jewish committee”. It seems that the bank, the bills and the “wages” received by many prisoners during imprisonment in the ghetto had an additional role: they gave the impression of “normalcy,” of an orderly and routine everyday life that the Nazis indeed tried to present to the official representatives of the Red Cross who visited Theresienstadt. A number of these bills from the Theresienstadt Ghetto are preserved today in the Archives Department of the National Library of Israel. The Library recently expanded its collection with an additional six bills in excellent condition. The currency was donated by Ruth Brass in honor of her father, the late Lionel Schalit, a prominent Zionist and community activist and a leader in the European Maccabi Movement.

We have examples of all the various nominal values; some of them show signs of wear, but most seem completely new. These bills serve to document one of the chilling realities of the Holocaust – the efforts invested in hiding the evils of the Nazi regime behind a façade of order and reason. These bills are symbols of an imaginary “normalcy” that never existed, during a period of persecution and eradication.