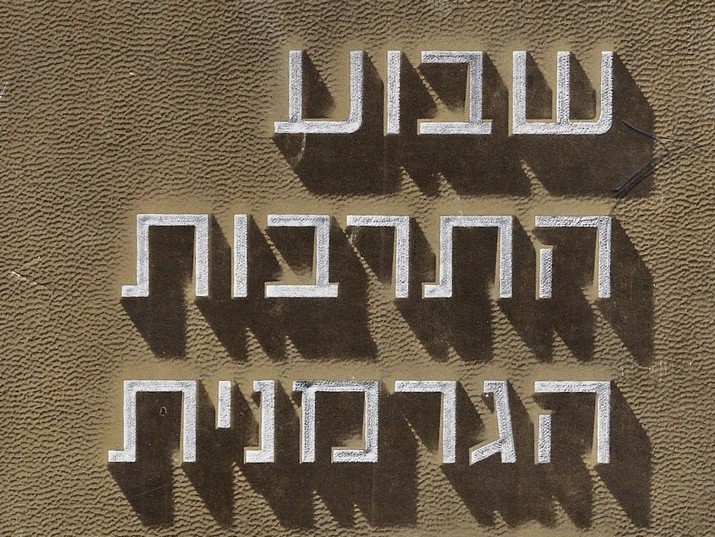 After the establishment of diplomatic relations between Israel and Germany, it was incumbent on both countries to infuse their ties with content beyond the solely diplomatic and economic. A convenient way of doing so was the development of activities in the realm of culture. As one of the first steps, in March 1969, the city of Stuttgart hosted a series of events in collaboration with Israeli cultural figures. For example, philosopher Akiva Ernst Simon delivered a lecture, a group of young musicians from the Thelma Yellin School gave a concert, and the Stuttgart Municipal Library organized a book exhibit from its collections in which many books relating to Judaism and Israel were displayed, as well as books written by Israeli authors. It appears that the organizers – including the Israeli embassy in Germany – wanted to check how the presentation of Israeli culture would be received in a large German city. Letters between the Mayor of Stuttgart to Prof. Simon suggest that the events were a success.

Two years later, in November 1971, in coordination with the Prime Minister’s Office, the three largest cities in Israel – Haifa, Tel Aviv and Jerusalem – hosted “German Culture Week.” Despite the name, the series of events went on for almost two weeks. The program included an exhibit about the life and work of Heinrich Heine, the famous Jewish-German poet who for many Israelis of Germany origin was a cultural symbol, as well as an exhibit that presented the works of German artist Käthe Kollwitz.

The event opened with a concert by the Israeli Philharmonic Orchestra. In addition, soloists from Germany performed in a number of concerts in the three cities. Lectures were given by Prof. Akiva Ernst Simon, and three literary evenings were held in the host cities, with the participation of German author Günter Grass. Grass’s books already existed in Hebrew translation, and he was therefore well known among the Israeli public. The exhibit of the artist Käthe Kollwitz and the public readings by Günter Grass were most probably made possible by the government of West German Chancellor Willy Brandt, which had a left-wing tendency. The two German artists were identified with left-wing political views. The Schiller Theater Ensemble from West Germany appeared on stages in Haifa, Tel Aviv and Jerusalem with the play ”Emilia Galotti” by Gotthold Ephraim Lessing and the play “Happy Days” by Samuel Beckett.

The response of the Israeli audience to the events was mixed. What elicited the main response from the press was the visit of Günter Grass. The newspapers reported on his left-wing political opinions, and on the meetings and discussions that he held in Israel, for example, his meeting with then Prime Minister Gold Meir and with Yitzhak Ben Aaron, Secretary of the Histadrut at the time.

Ben Aharon condemned the Israeli demonstrations against participation in the events in which Grass was participating, but he also defined the timing of the week as a “pathetic mistake”: The cultural events took place over the days that included the 9th of November – the anniversary of Kristallnacht, the pogrom that swept across Germany in 1938 against Jewish institutions and commercial companies. Materials from the period contain reports of demonstrations of Beitar members against the “Week of Culture” in general, charging that it “cultivates forgetfulness” regarding the crimes of the Holocaust.

The timing indeed was problematic and illustrates how the German organizers lacked sensitivity to dark dates of this type. However, the employees of the Tel Aviv and Jerusalem municipalities also, apparently, did not sense the problematic nature of the date, and were thus also responsible for enabling activities to take place on this sensitive day.

The evening of Gunter Grass’s reading at Canada Hall at the Hebrew University’s Givat Ram Campus was accompanied by booing on the part of Beitar activists. For one and a half hours, the young people from Beitar scrabbled with the representatives of the “Yekkim” (Jeckes) including Shalom Ben-Chorin and former Director of the National University Library, Kurt David Wahrman. Jerusalem Mayor Teddy Kollek also failed to calm the atmosphere. Ultimately, the author suggested changing the nature of the event from a reading to a discussion. The Beitar activists agreed to the proposal. Another of Grass’s readings, in Haifa, passed without incident.

Other events also met with opposition from ideology-driven activists: before the opening concert, Mayor of Tel Aviv, Yehoshua Rabinowitz, and then-German Ambassador, Jesco von Puttkamer were supposed to speak. However, as the event approached, critical voices were raised against the organization of the week of culture, resulting in the mayor’s preferring to forgo the greetings, following which the German ambassador also opted not to speak. The play “Emilia Galotti” performed at Binyanei Ha-Uma was interrupted a number of times when opponents disturbed the actors with calls and screaming.

The incidents in the various events that were part of “German Culture Week” proved just how complex – over 40 years ago – the encounter was between German artists and the Israeli public. The memories from the days of the Holocaust were alive and present, and among considerable portions of the Israeli public, there was not necessarily a readiness to conduct ties with Germany. At the same time, the events attracted spectators and an audience, rendering it impossible to determine whether the “Week of German Culture” was either a complete failure or an unequivocal success. The complete picture of the days of November 1971 illustrated, therefore, the complex situation in ties between the two societies and the two countries, a delicate mix of attraction and opposition.