Four Israeli Premieres, Some VR and a Little Iraq N’Roll at the Library

Fifth Docu.Text film fest kicks off August 18-22 at the National Library of Israel 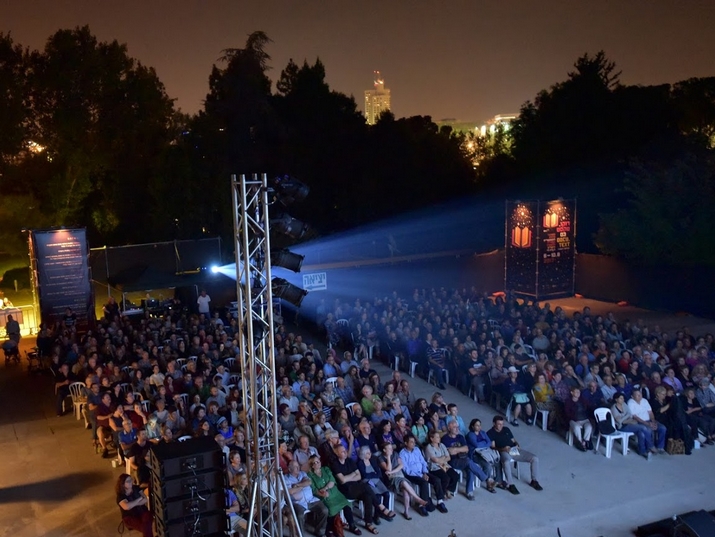 A screening at the Docu.Text festival. Photo: Yoni Kelberman
By Zack Rothbart

Four acclaimed documentary films will have their Israeli big-screen premieres at the fifth annual Docu.Text Documentary Film Festival at the National Library of Israel in Jerusalem, August 18-22, 2019. Two of the premiered films will be virtual reality (VR)/augmented reality (AR) experiences offered to festival goers for the first time. Docu.Text will feature dozens of indoor and outdoor screenings, special tours, conversations with filmmakers and experts, as well as a concert on the National Library Plaza featuring Israeli rocker Dudu Tassa exploring his grandfather’s Iraqi musical roots.

The four premieres are: “Moynihan“, an immersive portrait of intellectual, diplomat and legendary New York senator Daniel Patrick Moynihan; “Zikr: A Sufi Revival“, which takes participants on an interactive VR journey into the world of ecstatic ritual, dance and music in Tunisia; “East of the Rockies“, an AR experience about the forced displacement of Japanese-Canadians during World War II; and “Paul Auster – What If“, offering 70 years of American history through the renowned author’s eyes.

Besides film screenings and the VR/AR area, the festival program includes a number of special events. Following the screening of “Moynihan”, the film’s director Toby Perl Freilich will talk with Mike Herzog, retired IDF brigadier general and current Milton Fine International Fellow of The Washington Institute, whose father Chaim worked closely with Moynihan when the two were ambassadors to the UN at the time of the infamous “Zionism is Racism” decision in 1975.

The American creators of the VR experience “Zikr: A Sufi Revival” will also be at the festival, where they will talk about experiential storytelling.

The “Truth be Told” one-day seminar  will focus on the issues of cultural responsibility and creative copyright, examining the place of the Library, which is charged with preservation of knowledge in an era where it seems that truth is more relative than ever. The seminar will be held in cooperation with the Forum of Documentary Filmmakers.

Docu.Text 5 will close with “Iraq N’ Roll”, the story of popular Israeli rocker Dudu Tassa’s personal journey to reconnect with the musical legacy of his grandfather, Daud al-Kuwaity, who along with his brother Saleh was one of the most celebrated musicians in the Arab world of the 1930s and all but forgotten in 1950s Israel.  The film will be followed by a concert by Dudu Tassa and the Kuwaitis, who recently toured with Radiohead, as they celebrate this journey in music live on stage.

Docu.Text is a collaboration with Docaviv, and is made possible with support from Carole and Saul Zabar, Bader Philanthropies and an anonymous donor.

For more information and to purchase tickets, please visit: docutext.nli.org.il/english.

International Members of the National Library of Israel get a discount to the festival and other benefits throughout the year. The Times of Israel is the proud media partner for Docu.Text 5.