Were they men or women, rabbis or sorcerers, legal experts or ignoramuses? 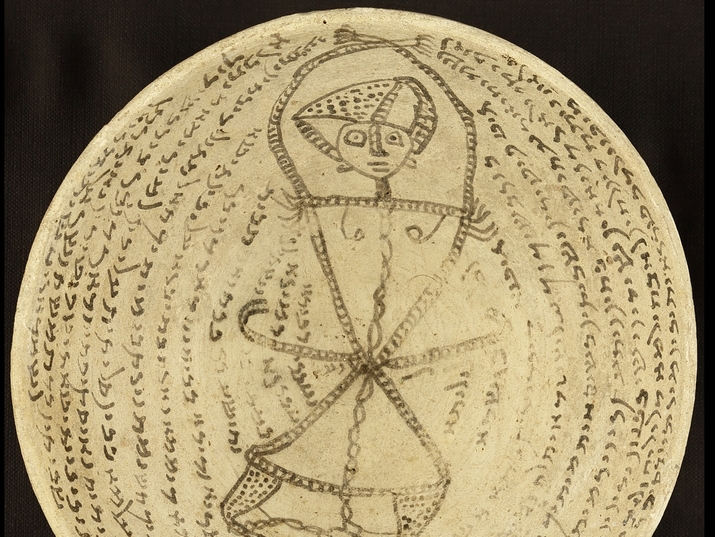 Ancient Babylonian incantation bowl from the National Library of Israel collection. This bowl was donated to NLI by Ms. Aliza Moussaieff.

Were they men or women, rabbis or sorcerers, experts in rabbinic law or ignoramuses?

The answer to this question remains elusive; the amulets and bowls do not contain a name of a scribe; nor do we generally possess any external accounts of their creation. This confusion is reflected in the many ways scholars of Jewish magic refer to amulet-writers: ‘scribes’, ‘practitioners’ or ‘professionals’, as well as ‘exorcists’, ‘magicians’ and ‘sorcerers’, are often employed interchangeably.

More than 600 Jewish Aramaic incantation bowls, created in Sasanian Babylonia roughly 1,500 years ago, have been researched and published, while at least three times that number remain unpublished. They contain numerous incantations, usually designated for the general protection of a named individual but also designated for other purposes such as medical cures, business prosperity, love charms, curses and more.

Other than a few dozen Jewish seals, the incantation bowls represent our only surviving material evidence from Jews in the Sasanian Empire in Late Antiquity. This was a crucial time in Jewish history, as this was the period in which the Babylonian Talmud was redacted and transmitted, a period that therefore shaped the course of Jewish religion for generations to come.  The bowls therefore provide us with first-hand and contemporary knowledge of Jewish practices at a formative time, knowledge that we would not gain from reading the Talmud alone. Although the incantation texts contain potentially invaluable historical information as well as biblical quotations and parallels to rabbinic texts, they remain primarily the subject of study of scholars of linguistics or of Jewish magic.

A number of scholars have proposed historical identifications of the bowl authors. In his pioneering volume of incantation bowls published in 1913, James Montgomery made an important distinction between, on the one hand, the majority of the bowls written by ‘exorcists’ with ‘professional possession of occult powers’ and, on the other, the poorly written bowls, especially in pseudo-script, which he suggested were written by laymen.

About a century later, Shaul Shaked also emphasized the wide range of writing skills of the authors of the bowls while noting the range of knowledge of scripture and other Jewish expressions. Shaked suggested that the authors who were learned in matters of Jewish formulae were connected to the ‘rabbinic tradition’.

For example, sometimes female and male clients are listed in the first-person as serving a divorce document to a demon, thus employing proper legal document formulae. Moreover, the vast majority of these bowls begin by listing the client in the first-person singular, but later in the same text switch back to the regular expected third-person ­singular, indicating that the first-person is not a reflection of the incantation bowl’s scribe, but rather a technique to distance malevolent forces from the client(s). This would also explain why we have different first-person formulae, with varying names, written by the same hand. It bears stressing that professional scribes were necessary in pre-modern societies in which many individuals, male and female, were illiterate.

Other prevalent features in bowl incantations point instead to a guild of scribal professionals. The texts appearing on some magic bowls bears a striking resemblance to the contemporary Jewish divorce document, and this is hardly coincidental. It is part of a much larger phenomenon of the use of legal formulae in the bowls, a phenomenon that should be linked to scribal professionals responsible for a range of legal documents. In fact, signs of professional scribal practices in the bowls have been identified by scholars, including Siam Bhayro, who has concluded that, “the same scribes who would be employed to write Jewish legal documents … were able to supplement their income by writing incantations”.

Indeed, the most striking feature of knowledge of scribal practices is the use of precise Jewish legal formulae. For example, the use of time designations as part of the divorce formula, including specific dates according to the Seleucid era; presenting the clients with the additional words ‘and any name he/she has’, in line with the Tannaitic instruction; employing Jewish divorce formulae; uses of perpetuity clauses and closing formulae.

Further evidence regarding the scribal profession of the bowl authors may be found in their designation for their opponents. In one carefully written bowl (known as “AMB6”), which was published and translated by Shaul Shaked and Joseph Naveh and is currently on display in the Israel Museum, there is an intriguing text designated for the protection of Berik Yehabya son of Mama. The bowl ends with a unique spell for protection:

“I adjure you in the name of He who is great and fearsome that you may silence for Berik Yehabya son of Mama the mouths of all people who write books, who sit in forts, who sit in market places, and in streets, who go out on the roads, so that their tongues should cleave to their mouths, and that they should not speak evil words against me. In the name of he who commanded and it came into being. Amen, Amen, Selah.”

The formula begins with an adjuration silencing the mouths of the people who ‘write books’ (‘sifrei’), who sit in various places and go out on the roads. In Jewish Babylonian Aramaic, the word ‘sifra’/’sefer’ can mean ‘scroll, scriptural book or document’.

This leads to the question: why would the client, Berik Yehabya, seek protection from writers of books?

Perhaps, because these writers are professional scribes who write documents and scrolls, but also curses and magical spells, such as bowls. Thus, this scribe is attempting to ‘silence the mouths’ of other scribes who write curses. From this it would seem that the way this magic bowl author referred to himself and to his competitors is not as professional magicians or sorcerers, but as scribes. Indeed, among the malevolent forces the bowl incantations regularly sought to ward off are other curses and spells aimed at the clients. This unique incantation would therefore target not only the opposing incantations, but the scribes responsible for them. Other contextual clues, including the names of the locations in which they sit, provide additional evidence for the professional scribal nature of these writers.

The bowl also makes clear that these scribes were not confined to the marketplace, but in fact some went out on the roads, peddling their goods from door to door. This evidence, alongside the extensive use of legal formulae and the presence of self-designations from the legal sphere, substantiates the conclusion that many bowl writers were in fact professional scribes.

This would fit the material aspect of the bowls as well. Bowl scribes carefully used ink in order to write small square letters on the surface of a bowl. The penmanship of some bowls are particularly striking and my initial research demonstrates that there may be a correlation between the quality of the handwriting and learned content of the bowl texts.

Certainly, this conclusion does not contradict Montgomery’s and Shaked’s assertion that the bowls demonstrate a variety of expertise. On the contrary, in a recent article, Simcha Gross and I argue that the Jewish incantation bowls should not be viewed as a single corpus. Rather, the bowls were produced by different groups of scribes, some of whom were socialized according to rabbinic norms and some of whom were closer to the traditions of neighboring religions. Though the medium they employed – ceramic bowls – was the same, their producers were not necessarily part of the same scribal circles. We should instead think of a market of competing scribes with differing scribal expertise, where the same client could commission a bowl from a scribe who in turn wrote a bowl that would fend off the incantations of his scribal competitors.

If indeed some of the bowl writers were professional scribes, they may have engaged in other forms of penmanship such as biblical and liturgical writing. It is important to note that in Aramaic there is no lexical distinction between different kind of scribes; therefore there is seemingly no reason to limit some of the ‘writers of books’ to just bowls and legal documents. Indeed, the incantation bowls quote a wide variety of biblical passages, and Targum, as well as liturgical texts, which may attest to expert knowledge in these fields.

While there are sometimes minor divergences from the Masoretic spellings, these may be due to scribal practices of the time and place of the bowl writers and do not necessarily contradict the possibility that scribes of bowls engaged in copying biblical texts.

Another important component of many bowls is liturgical quotations, such as blessings and prayers, including the Shema. This too may attest to the profession of the bowl scribes many of whom may certainly also have engaged in some sort of liturgical writing. Given the various scribal roles apparently performed by these authors, the terms ‘magician’ and ‘sorcerer’ may be too restrictive of the professional functions of these Jewish writers.

Focusing on the professional aspect of the bowl writers may shed light on attitudes towards these practitioners in the Babylonian Talmud. Some scholars have searched for rabbinic attitudes towards the bowl writers, in stories concerning witchcraft and/or female sorcery, but following the conclusion that bowls were produced by professional scribes, the conflation of bowl writers and sorcerers may lead us astray. Indeed, it would be more accurate to search for rabbinic passages dealing with amulets, since the bowls were considered amulets by their producers, as can be deduced from the common introductory formula: “this is an amulet”. The rabbis identified amulet writings with “experts” and amulets written by such experts are even permitted to be carried on the Sabbath (Mishnah Shabat 6:2). Moreover, in at least one story in the Babylonian Talmud, the rabbis themselves engaged in amulet writing (Tractate Pesachim 111b).

Rabbinic sympathetic attitudes toward amulets fits the proposed identification between the incantation bowls and expert writers. As with other professionals, the rabbis accept the fact that there are non-rabbinic experts in a variety of areas and rely on their expertise. The rabbinic views of amulet writers as experts, alongside the clear scribal nature of the incantation bowls, problematizes the common use of the generic term ‘Jewish magicians’. There is no rabbinic term to designate these ‘magicians’, and certainly no pejorative term. Once we appreciate these Talmudic passages alongside the conclusion that many bowl scribes emerge from a professional scribal context, the rigid binary between rabbis and magicians begins to unravel.

On a social level, the clear scribal nature of the incantation bowls challenges the common scholarly perception of the ancient Jewish “magicians”. The bowl writers may have even been viewed as a religious elite, consulted at times of need. Indeed, challenging the popular/ elite dichotomy is true not only on the social or professional level. We may even go one step further by challenging the categorical dichotomy between law and magic as forms of high/scholastic versus low/popular cultural expressions.

As we have seen, the magical texts themselves are replete with legal formulae, and it seems reasonable to assume that for the scribes of the Babylonian incantation bowls the lines between magic, law, and religion were not rigid, and perhaps nonexistent.

A version of this article, “Who were the Jewish ‘magicians’ behind the Aramaic incantation bowls” originally appeared in the Journal of Jewish Studies (Autumn 2020, vol. 71, no. 2, pp. 235–254). Reproduction rights granted by kind permission.

The adapted article appears here as part of Gesher L’Europa, the National Library of Israel’s initiative to connect with people, institutions and communities across Europe and beyond, through storytelling, knowledge sharing and community engagement.