A rare look into two volumes that contain hints of a cultural world that was and is no more... 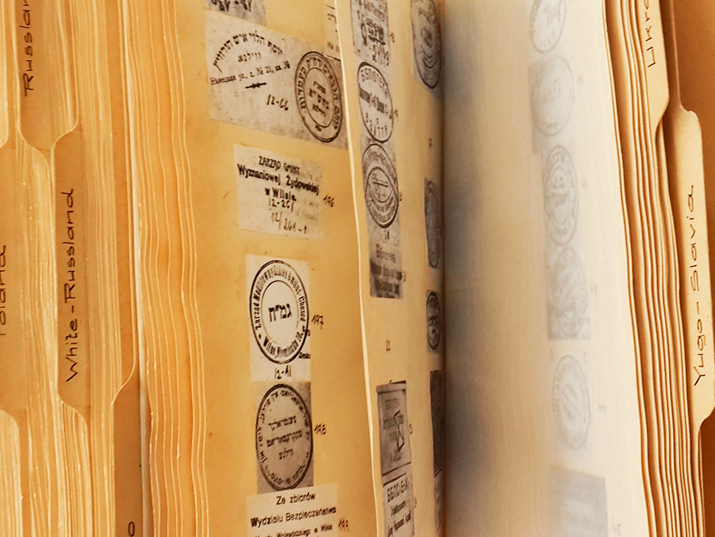 In the city of Offenbach, near Frankfurt am Main, inside a five-story building, Captain Isaac Benkowitz stood among hundreds of boxes of books, wondering what to do. His unit’s mission, part of the Monuments, Fine Arts, and Archives program (MFAA) responsible for the preservation of cultural property under the Allied Military Government, was to return all the identifiable books in the Offenbach warehouse looted by the Nazis to the countries they belonged to.

The Nazis stole millions of books during the Holocaust. Nearly two million volumes had found their way from Eastern and Western Europe to the Institute for the Research of the Jewish Question in Frankfurt. Founded by Alfred Rosenberg, the Nazi regime’s chief ideologue, this institute was just a small part of his grandiose plan to establish a network of research institutes for Nazi studies under the umbrella of an Academic Institute for Nazi Studies (Hohe Schule der NSDAP), for which he had received Hitler’s personal blessing. However, Hitler asked that Rosenberg begin with the establishment of a library and wait until after the war to establish the institute. Nevertheless, the institute in Frankfurt began to operate during the war and its library became the largest “Jewish Library” in Europe.

Because Frankfurt was under bombardment, the institute sent most of the books to the town of Hungen, where American forces found them at the end of the war. In order to deal with these books and the many others that continued to surface in various storerooms and cellars, all the books were sent to the warehouse in Offenbach.

It was Benkowitz’s predecessor, another Jewish officer by the name of Seymour Pomrenze, who established the Offenbach Archival Depot (as it was known). A huge and daunting task lay ahead of him but within a short while he had the whole process of sorting and organizing the books up and running. In a matter of months, he was able to return roughly a million and a half books. Pomrenze was fortunate not to have to sort through all of them, as a large portion of the books, mainly from The Netherlands and France, were still in the crates from their original libraries. All he had to do was examine the crates and arrange for their return.

Benkowitz, on the other hand, who had been Pomrenze’s assistant and right hand until the latter’s departure, knew that he would have to deal with hundreds of thousands of other books from all across Europe, each from a different place.

The majority of the books were from Jewish libraries and institutions, and some had stamps to that effect.

Benkowitz entered the huge sorting room, picked up a volume of the Talmud and saw the ex-libris of a communal rabbi from Lodz. He saw a book of Yiddish poetry that had recently been the property of a school library in Vilna. In a Jewish philosophy book in German, he found the stamp of a Jewish community library in Berlin.

Years later, Benkowitz would write in his memoirs:

There was something sad and mournful about these volumes … as if they were whispering a tale of yearning and hope since obliterated … I would find myself straightening out these books and arranging them in the boxes with a personal sense of tenderness as if they had belonged to someone dear to me, someone recently deceased

Benkowitz did not know then whether these books would actually be returned to the countries they had been stolen from. Was it possible that Germany would receive the books of the Jews they had murdered? That Soviet Ukraine would be given the prayer books from the now empty synagogues in Kiev?

Until he received a formal decision, Benkowitz was tasked with the work of sorting. Such a vast number of books required a professional and skilled staff. He had a team. The army had placed under his supervision German workers who were assigned a variety of jobs after the war. But these Germans weren’t librarians, most had no foreign language skills and did not know how to sort books. While a large portion of the books contained stamps bearing the owners’ names, the Germans weren’t able to read the names in Yiddish, Polish or any of the other languages.

Benkowitz had an idea. He and his team collected stamps that were found repeatedly in a variety of books in the storeroom. He photographed the stamps and pasted them into a large catalogue organized by country. There were countries with hundreds of stamps of institutions and single owners, and countries with smaller representation. The wording, shape or color of the stamps of some of the institutions had changed over the years, and Benkowitz made sure that all the variations appeared on the same page in the volume.

The German workers thus did not have to read the writing. They just had to identify the form of the stamp and the letters. In this way, hundreds of thousands of books were sorted into crates according to country. Benkowitz prepared two volumes containing thousands of stamps. The first volume contained stamps from Austria, France, Germany, The Netherlands and other countries in Western Europe. The second contained stamps from countries in Eastern Europe such as Czechoslovakia, Lithuania, Poland, Belarus and Ukraine as well as a detailed list of libraries in a number of cities.

The books were sorted with the help of these catalogs, but they were not necessarily returned to their countries of origin. In the years after the war, additional books were discovered. A large portion of these books eventually reached the National Library in Jerusalem through the Jewish Cultural Reconstruction organization, which took over responsibility for the Offenbach warehouse from the US Army. That is the reason that today we find books in the National Library bearing the stamp of the JCR and of the original library from where the books were stolen by the Nazis.

For example, here is a Midrash Rabbah book which can be identified as part of the collection of the Strashun Library in Vilnius, named after Rabbi Mattityahu Strashun. Warehouse workers who were incapable of reading the Hebrew letters could make use of the stamps collected in the Offenbach catalog. The book also contains JCR stamps.

Here is another example, featuring a book from the Jewish Theological Seminary of Breslau, alongside the stamp used to identify the book’s origin. This stamp appears in the list of German stamps in the Offenbach catalog.

Like his predecessor, Benkowitz did not remain long in his post in the Offenbach warehouse, but during his time there he was able to sort through the identifiable books. There was no longer a need for the volumes with the stamps and he took them back with him to the United States. Shortly after, he decided to donate them to the National Library in Jerusalem and since May 1947 they have been kept in the Library’s archives. Copies of the volumes can be also found in the archive of Seymour Pomrenze, the first director of the Offenbach warehouse. His archive is preserved by the American Jewish Historical Society in New York and there are some who posit that it was actually Pomrenze who came up with the idea for the catalogs. Of course, it is possible that Pomrenze and Benkowitz came up with the idea together.

Today, seventy years later, these heavy tomes from the warehouse of looted books in Offenbach serve as a kind of obituary list. Not a list of names of those murdered in the Holocaust, whose final resting places remain unknown, but an eternal memorial of the Jewish schools, yeshivas, and community centers across Europe. Institutions in which the sounds of learning and of memorization were silenced by the Holocaust. The memory of these institutions is commemorated among the pages of these volumes and now online as well, following the digitization of these two books by experts at the National Library. Volume I Volume II