A Spectacular 400 Year-Old Scroll of Esther

​Take a look at the Scroll of Esther of Ferrara, Italy, whose magnificent illustrations show the expected fate of anyone who threatens to harm the people of Israel. 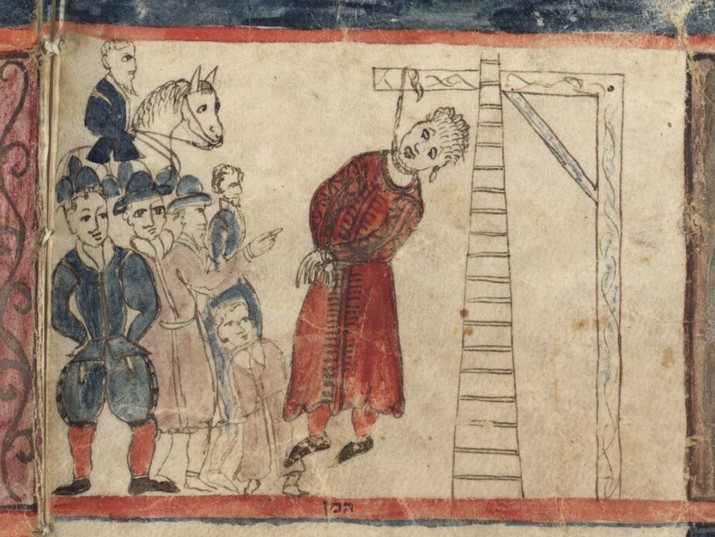 Among the treasures preserved at the National Library of Israel is a unique Scroll of Esther that is over 400 years old. What is particularly interesting about the scroll, inscribed in 1617, are the illustrations that adorn it.

They seem almost cartoonish, and the scribe and illustrator, Moshe ben Avraham Pascarol, was not afraid to look directly at the atrocities described in the scroll, and accentuate them in order to achieve a dramatic effect. Many of the violent scenes, such as the decapitation of Vashti as well as the hanging of Haman and his sons, are graphically illustrated on the pages. The promotion of modesty is also apparent. While the violence and colorful gore are celebrated, the sexual aspect of the Scroll of Esther is completely downplayed.

Each illustration ascribed to a verse in the Scroll of Esther illuminates it in a certain light. But one illustration is known to be inspired from other sources beyond the Scroll; in this image, Haman is seen offering Mordecai, who is dressed in mournful attire, the garments of the king. We also see three children who are asked to interpret what is happening, and they do so with three additional verses, all taken from other books in the Bible.

The third verse is the most telling – “I will wreak My vengeance on Edom through My people Israel” (Ezekiel 25:14).

This statement reveals a deliberate message from the illustrator. Traditionally the nation of Edom is linked not with Persia (the kingdom mentioned in the Book of Esther), but with the Roman Empire, and thus all of Christendom. Since the scroll is Italian and influenced with paintings of figures from the Italian Renaissance, the hidden message of the scribe and illustrator was very likely there for the Jews of Italy to interpret.

The message was probably meant as encouragement, calling on the Jews to take heart, for in every generation and in every place where the people of Israel reside – the Almighty will avenge any assault on them.