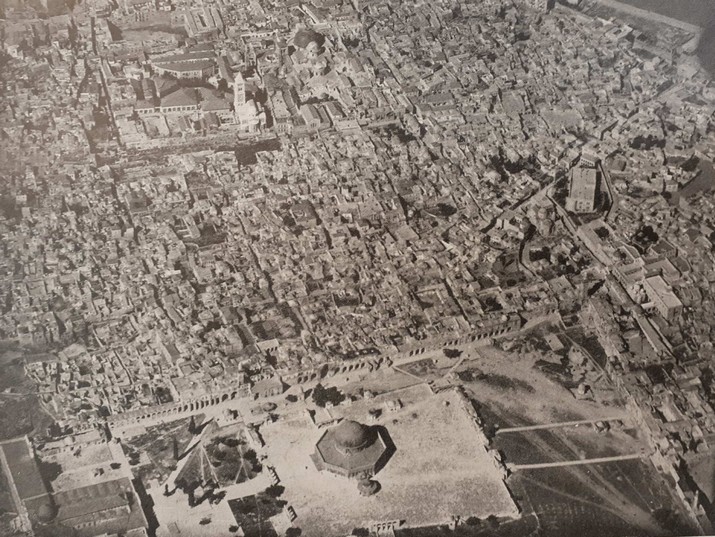 "The courtyard of the Temple" in the words of the German researcher and theologist Gustaf Dalman. An aerial photograph of The Temple Mount.

It is common for the most brutal and bloodstained wars to serve as catalysts of technological progress; the First World War was no exception: the development of modern-day bombs, the first military use of tanks (still only as means of transport, not as weapons), the first military flamethrower, and more. No place was left unchanged: the shells scarred the battlefields, the trenches changed the lay of the land and the majority of the ancient empires which fought in it collapsed during or after it, never to rally again.

The Land of Israel was not the most deadly battle front, but here too the War completely changed life, and brought some of the European technological developments with it. An example of one such development can be found in an unexpected place: a book name “One Hundred Aerial Photographs of Palestine“, published by the German theologian Gustaf Dalman.

Aerial Photographs in the Service of Christian Theology

Dalman’s tremendous interest in the Land of the Bible and everything connected to it led him to many diverse fields of research: during his long life the German theologian researched Jewish history, archeology of the Biblical period and the language of residents of the Land and their neighbors. Dalman did not only delve into the Bible and the New Testament, but was also fluent in Jewish literature from the Second Temple period onward. In 1902, the theologian was one of the founders of the “German Evangelical Institute for Research of Ruins in the Holy Land in Jerusalem” – an institute he headed until 1917, and which still exists today.

Dalman was not only interested in the culture of the Biblical period, but he also researched the landscapes, animals and plants of the Land. He wholeheartedly believed that only the most encompassing understanding possible of the nature and people who live in the Holy Land will enable theologians to correctly understand and interpret the holy works God bestowed upon his creations. Therefore, Dalman wrote about and documented the Land of Israel in thousands of pictures and words.

Even when he acted as a preserver and editor – work which was fully expressed in the book he published in 1925, the fingerprint of the researcher of the land of the Bible is clearly visible in the book. Dalman used the hundred photographs which appear in the book as a mirror into the past, and ponders what the landscapes teach us about the world of Jesus and the prophets. This fact leads Dalman to interesting editing choices: as Professor Binyamin Zev Kedar notes in his book ‘Looking Twice at the Land of Israel’, “Dalman, who researched the Land of Israel…did not feel the need to bring photographs of the new Jewish settlements.”

It would be naïve to see Dalman as an apolitical researcher interested solely in the past. As the first director of the institute he established, Dalman helped the German empire to infiltrate deeper into the Middle East under a religious-Christian guise. It is possible that when he published his book in 1925, almost a decade after the collapse of the Ottoman and German empires, Dalman (like many of his German contemporaries) had abandoned his imperialistic aspirations regarding the Middle East. However, Dalman’s curiosity about and love for the land of the Bible remined strong until his death in 1941.